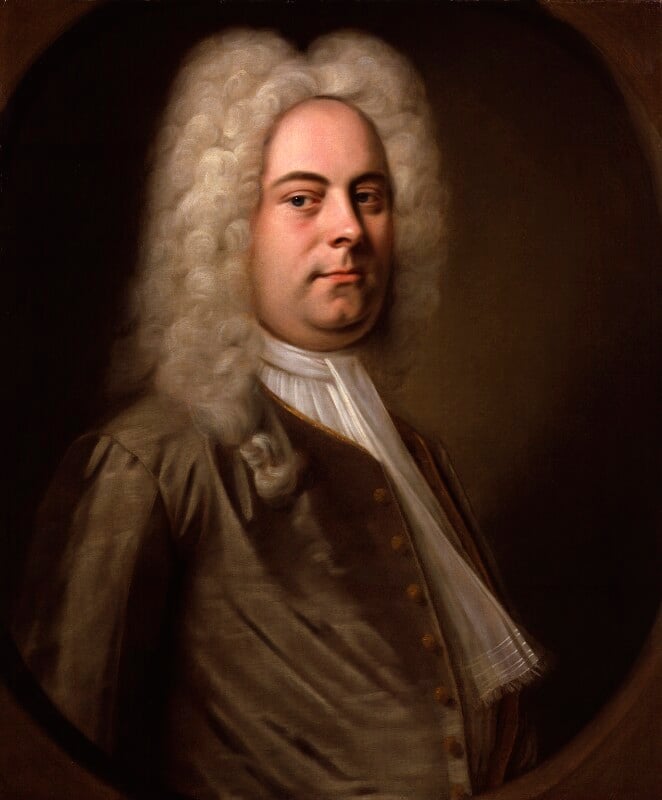 Denner's name first occurs in the Anecdotes of George Frederick Handel and John Christopher Smith, 1799. Though technically rather less accomplished than certain heads of old men and women for which he was celebrated, NPG 1976 is nevertheless smoothly painted with a quiet progression from tone to tone. Furthermore, despite the limitations of contemporary conventions and the highly stylised wig, it emerges, after cleaning, as a shrewd portrait of the composer. The style is close to a signed and dated head and shoulders of 1733 seen at Christie's, 10 October 1958, lot 160. Handel himself owned portraits of an old man and an old woman by Denner which he bequeathed to Jennens, [1] and it is very possible that he would have sat to a painter whose virtuosity he admired. It has been stated, conceivably through confusion with the Knole portrait, that NPG 1976 was painted in 1736. This date, also given in the Anecdotes, is too late. Vogel's suggestion, made as early as 1896, [2] that the portrait relates to Denner's English period, seems to have been overlooked. Denner, who came from Hamburg, was in London from 1721 to 1725, and from August 1726 to July 1728. [3] The looped ends of Handel's wig, and his steinkerk would have been in the height of fashion a little before, but not after, 1730. The costume points strongly to the time of Denner's later London visit. [4]
The Knole portrait, signed Denner and dated 1736, has a long history as Handel. An inscription on the frame reads: FREDERICK HANDEL./.AETATIS.52./OBT. 75.. The frame, clearly 18th century but not necessarily contemporary with the portrait, was there at least by 1817 [5] and may well date from the 3rd Duke of Dorset who is believed to have bought the work in 1778. [6] He also purchased that year portraits of Goldsmith and Garrick by Reynolds and had the fact recorded on the back of the canvases. [7] His collection of musicians included Giardini, Corelli [8] and Sacchini, [9] the last two bought through Reynolds in the 1770s. [10] In the Knole portrait the sitter looks younger than in NPG 1976, the eyebrows are closer to the eyes, he has no cleft chin, and the face appears shorter and more rounded. There is, in fact, no relationship between the two portraits and the Handel at Knole is hard to accept as a portrait of the same sitter by the same artist, particularly as it now seems that NPG 1976 was painted at least eight years before. An attribution to Herman Van der Myn has been suggested but on comparison with Chandos (see NPG 530) and other works, this is almost certainly not valid.

Pentimenti round the outline of the shoulders; lightly cleaned and varnished 1929; cleaned 1967.

Engraved by E. Harding, 1799, for the Anecdotes of George Frederick Handel and John Christopher Smith.