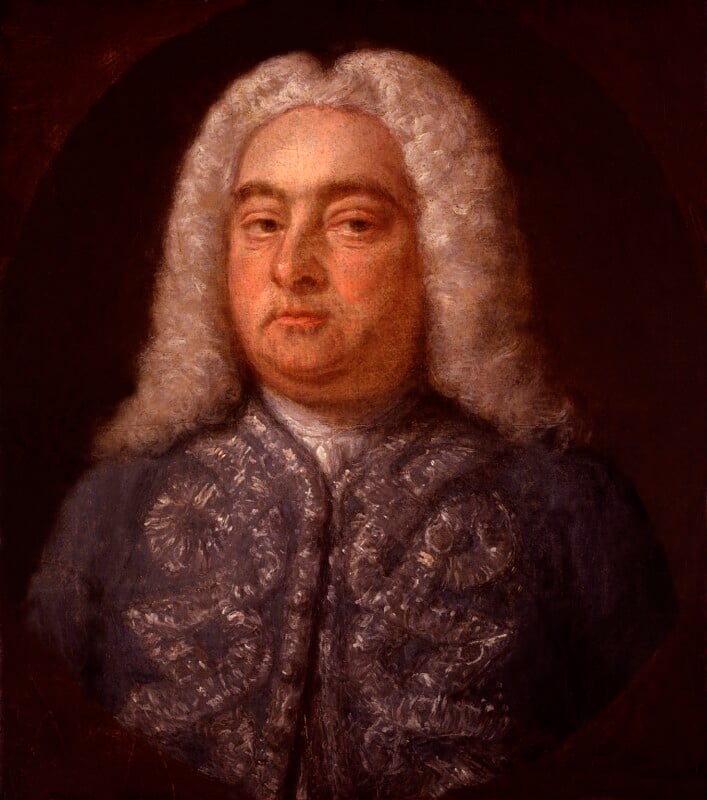 Signed and dated by his right shoulder F Kyte pinxit 1742, the xit and 42 apparently strengthened, perhaps since 1874 when in the possession of J. A. Jacob who had been unable to read the last two figures. [1] Milnes, c.1824, read the signature as Fr. Kyte pinxt. 1742. [2]
On the back of the wood in bold black, Mr Handel and, now removed to the picture dossier, information in the hand of W. B. Squire that the portrait belonged to Milnes (see Provenance).

NPG 2152 is probably the portrait from Keith Milnes' collection acquired by him in 1824. It was engraved, 1828, by F. C. Lewis, the engraving lettered Fr. Kyte pinxt 1742/From an Original Portrait, of the same size, by Francis Kyte, in the possession/of Keith Milnes Esqr. which was formerly engraved by Houbraken. Although Milnes was told by Sir Thomas Lawrence that the portrait was from life [1] it is now regarded as a derivative. Assuming the 1742 inscription to be correct it cannot have preceded Houbraken's engraving since, as lately discovered by W. C. Smith, the true date of publication is 1738 and not 1769. The engraving, hitherto associated with the 1769 edition of Judas Maccabeus, was advertised in The Country Journal, or The Craftsman for 22 April 1738: 'This Day is publish'd (And are ready to be deliver'd to the Subscribers for Alexander's Feast) A Print of Mr. Handel Engraved by the celebrated Mr Houbraken of Amsterdam. The Ornaments design'd by Mr Gravelot. Printed for John Walsh in Catherine-Street in the Strand.' [2] This confirms conclusions reached on stylistic grounds, the squaring, in particular, indicating a copy. It also accords with the little we know of Kyte (fl. 1710-45) and the improbability that Handel, by then so famous, would have sat to one so obscure. [3]
Hawkins suggests that the prototype was painted abroad, [4] though a small enough portrait could have been taken to Amsterdam. Handel was in Aachen for the waters in September 1737, returning at the end of October or the beginning of November. [5] The source of Houbraken's engraving is still to seek. Extant portraits do not carry conviction as being from the life. Besides the copy by Kyte, there is a pastel at St Giles. This has descended in the Shaftesbury family, who knew the composer, and it appears to be contemporary or nearly so. By the 1850s it had on the back of the frame a note that it was the work of Susanna (d. 1758), [6] who became the first wife of the 4th Earl of Shaftesbury in 1725. It measures 8 3/8 x 6 ¾ in., a little smaller than the engraving, and the double chin is less pronounced. A third version, an oil, was sold from the Hill collection, Sotheby's, 18 June 1947, but nothing is known of its previous history. It was subsequently owned by the late W. C. Smith, who believed it to be c.1759, but if so it is later than Houbraken. A fourth version is perhaps postulated by an engraving by Goldar, 1785, lettered as taken from a portrait then in the possession of The Honble John Spencer. John Spencer (1734-83), created Baron Spencer of Althorp, 1761, is presumably meant. He was a subscriber to the Houbraken engraving, but no version is known to the late Lord Spencer.

A test patch of varnish in the background, removed, 1960, between the sitter's left shoulder and the edge of the picture failed to disturb the squaring, which is therefore assumed to be underneath the paint; by inference the picture is a reduced copy; possibly revarnished, c.1824, when in the possession of Milnes.