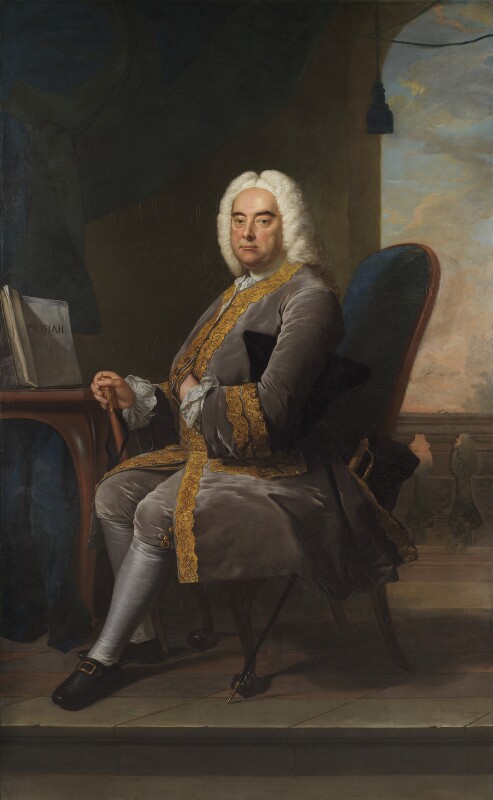 This is the second Hudson type, presumably commissioned by Charles Jennens c.1756. A small whole length sketch is in the Royal collection (Sir Oliver Millar, The Tudor Stuart and Early Georgian Pictures in the collection of Her Majesty The Queen, 1963, 556) and copies [1] include a head and shoulders, Royal collection (Sir Oliver Millar, The Tudor Stuart and Early Georgian Pictures in the collection of Her Majesty The Queen, 1963, 558), a head in the Fitzwilliam attributed to Grisoni and NPG 8. The sketch might have been part of the Smith bequest to George III but since it was apparently only recorded in 1876, this cannot be confirmed.
Hudson certainly made two portraits of Handel. In April 1750 he offered the Foundling Hospital a portrait for which the composer had agreed to sit [2] but none is known to have been acquired in Handel's lifetime, [3] and nothing more was heard of this. The first and better known type can be dated from an engraving by Andrew Miller (J. Chaloner Smith, British Mezzotinto Portraits, 1878-83, 927) lettered Thos. Hudson Pinxit London 1747, published in Dublin, 1749. An impression was known to Breun but there is no example in the British Museum. A rare early state of the engraving by Faber junior is dated 1748 [4] (J. Chaloner Smith, British Mezzotinto Portraits, 1878-83, 51) but the original has not been identified with certainty. A three-quarter length given to Oxford University by Samuel Howard before 1778 [5] does not appear to be from Hudson's hand. A more convincing oil corresponding closely to Faber's engraving entered the Staats und Universitäts-Bibliotek, Hamburg in 1883. Reputedly bought by, or sent to, Handel's family in Halle, it was acquired through the composer's biographer Chrysander for a public collection. [6] It appears to be inscribed, or possibly signed and dated, 1747 or 1749. According to Dr Burmeister, of the Hamburg Bibliotek, the last figure is '9' whereas the photograph seems to read T Hudson Pinxit 1747. The head looks very good although the treatment of the coat is unusually hard for Hudson.
An Apotheosis of Handel was engraved by Heath after a design by Rebecca and published 26 May 1787 on the Anniversary of the Commemoration. It is lettered The Portrait from an original Picture of Hudson's in the possession of Dr Arnold. Samuel Arnold (1740-1802), composer, was organist of the Chapels Royal and Westminster Abbey. His picture has not been traced, but Rebecca's drawing appears to be a version of the 1747 type Hudson without the wig.
There is no firm evidence for earlier sittings to Hudson. A drawing in red and white chalk on blue paper, stated to be inscribed George Frederick Handel Hudson Pinxit. 1 day of June 1743 was sold at the Hôtel Drouot, Paris, 12 September 1920, lot 196. Miss Davies lists it as a 'Sketch for the portrait presented to the Royal Society of Musicians by Mr Redmond Simpson in 1780' [7] but it might even be a copy of the Faber engraving of 1748. The reproduction in the Drouot sale catalogue is very poor and there is no way of telling whether the words were added later or whether the date is 1743 or 1748. The drawing does not relate to the portrait in the Royal Society of Musicians (see NPG 2151); the catalogue statement that it is a signed and dated Hudson remains unsubstantiated.

Some discoloured varnish; the craquelure in a few places now opening widely; bituminous in the darks, especially beneath his left forearm. A pentiment shows that the chair back had previously been placed a few inches further to the right.

Bought, 1968, with the help of a special grant from H.M. Government and a public appeal. A 'Portrait of Handel. Hudson', recorded in his London house in 1766, [1] was presumably sent to Gopsall where it was noticed by Britton in 1807. [2] From a drawing by Paine, Gopsall, Leicestershire, the home of Handel's friend and patron Charles Jennens, was probably completed c.1770; [3] bequeathed by Jennens to his nephew Penn Assheton Curzon, husband of Sophia Charlotte, Baroness Howe; thence by descent; deposited on loan to the NPG by Earl Howe, 1956, the loan terminated, 1967, and the picture sold, Christie's, 7 July 1967, lot 104; bought Leggatt's.