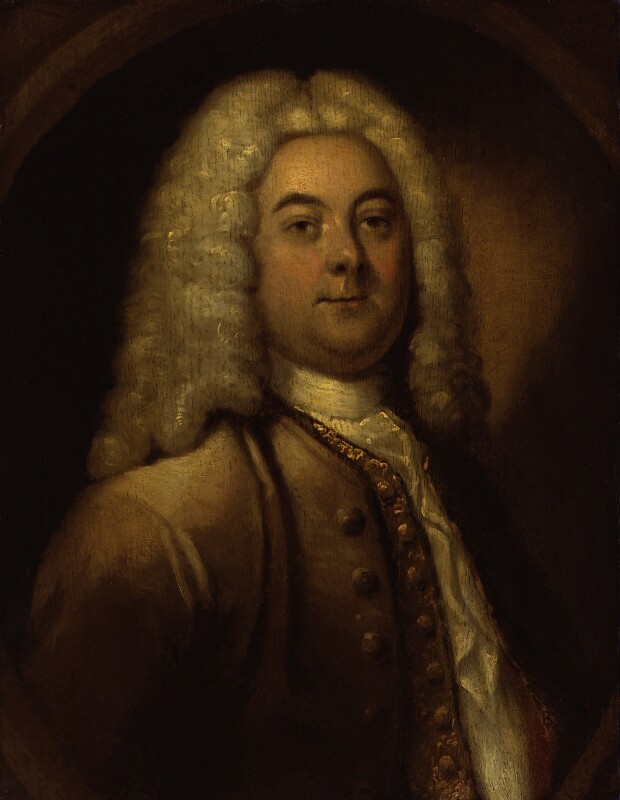 Inscribed faintly in black on the back of the panel: Mr Handel/Vn der Myn pinxit and a stencil 637 CJ above, now very indistinct.

On stylistic grounds NPG 2151 is a derivative of a prototype as yet undetermined and may be grouped with two oils in the Royal Society of Musicians and a pastel seen at the NPG in 1961. The oils, both head and shoulders life size, are very similar and probably one is a repetition of the other. Although no dates are available Miss Davies is of the opinion that the earlier version was possibly there by 1780. [1] A provenance for one of the two is suggested in the Musical Times (Handel number) of December 1893, where attention was drawn to a portrait in the Royal Society of Musicians said to be by Hudson and to have belonged to Samuel Arnold (1742-1802), Handel's editor c.1790,and later to William Hawes, Master of the Chapel Royal (1785-1846). The pastel of the same type by John Russell is one of four portraits of musicians in the collection, 1961, of Mrs M. P. H. Simms presented, according to family tradition, by George III to Samuel Wesley. [2] The set was painted c.1776 and included Boyce (now NPG 4214), signed and dated that year, Kelway (NPG 4213), with Corelli and Handel drawn posthumously. From the dress which is within a few years of 1740, Russell has obviously copied an earlier portrait of the sitter.
The inscription on NPG 2151 gives Van der Myn as painter and since such a name is unlikely to be associated with the portrait without reason, the attribution deserves serious consideration. The Van der Myn family is fairly extensive. [3] Herman, Amsterdam-born and patronised by Chandos, is the best, but even he remains little known. He died in London, 1741, and was active there c.1727. Both the oil at the Royal Society of Musicians and NPG 2151 in particular, when compared with such portraits as the 1st Duke of Montagu, Deene Park (84), signed and dated 1732 and C. H. Mildmay, Sotheby's, 6 February 1957, lot 17, signed and dated 1733, would seem too weak in execution for him. A somewhat more likely candidate, judging from his portrait of Anthony Cooke, [4] signed and dated 1755, collection Major Davies-Cooke, is perhaps Herman's son Francis Van der Myn (1719-83).
A further pastel first published in 1920, [5] as by Knapton, but without ownership or provenance, may conceivably be related to this type. No further information is available and the sitter, who noticeably lacks the thrust of jaw so evident in the 1748 Hudson, may be incorrectly named. Apart from this, the features, though softer, agree reasonably with authentic portraits, the pose being near the group associated with NPG 2151. The style, however, suggests a date perhaps as late as the 1770s. It could conceivably be the missing portrait by Hoare (see All Known Portraits, Lost Portrait).

Dark brown eyes and eyebrows, grey wig centre-parted to shoulders; brown coat over gold embroidered waistcoat, both unbuttoned, white neck-band and shirt ruffle; plain brown background, lit from the left; in an incomplete lighter brown oval, painted on three (?) vertical strips of panel, glued together, bevelled at the back along the top.

Two vertical cracks run down the panel, about a half inch in from the left, and two inches in from the right; slight loss along the edges; in 1927 when the cracks were repaired and the portrait cleaned and revarnished, four vertical strips were observed, one perhaps now hidden by a repair strip.