15 of 389 portraits matching these criteria: 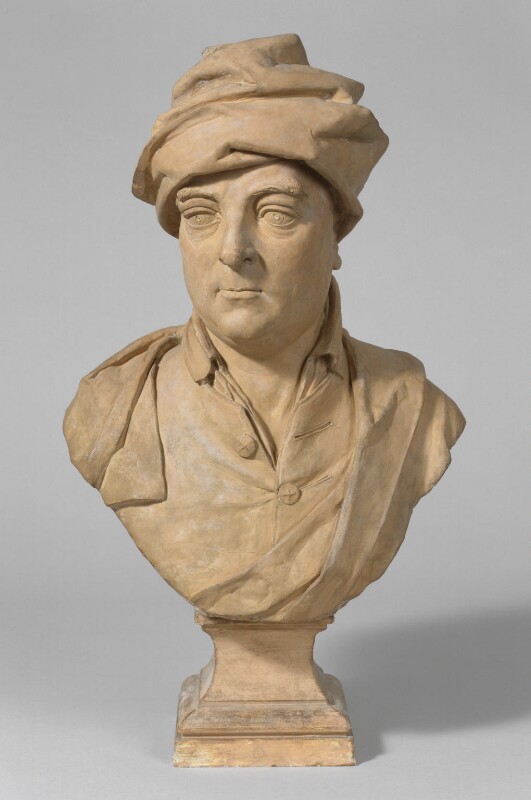 The socle has a mark bottom centre, probably to show the front, and may not be coeval with the bust. [Editorial note, 2013: see the printed edition of this catalogue for a reproduction of the mark.]
NPG 878 is not closely related to the marble bust at Windsor, [1] incised and dated 1739, by Roubiliac, the only major contemporary sculptor known to have portrayed the sitter. Tentatively equating it with a terracotta in the Roubiliac sale of 1762, Mrs Esdaile suggested it was perhaps a study for the Windsor marble. [2] This reading was possibly strengthened by confusion over the provenance. The terracotta of the Windsor type is now known to be in the Foundling Hospital. [3] Despite attribution in early Gallery catalogues and certain superficial resemblances in, for example, the cap and tassel and the arrangement of the collar in both the Windsor bust and ours, comparison with Roubiliac's half life-size terracotta of Ligonier (q.v. NPG 2013) clearly confirms that NPG 878 is in reality another type by another hand. This view is strengthened by confrontation with the near-identical recently discovered bronze in the Fitzwilliam Museum. [4] Neither is dated, nor has the date of publication been ascertained for a somewhat similar loose engraving from the Universal Magazine (F. O'Donoghue and Sir Henry M. Hake, Catalogue of Engraved British Portraits ... in the British Museum, 1908-25, 34). Both busts could be early, or even contemporary with the sitter; and it is tempting to associate them with an as yet unidentified edition of thirty casts advertised for sale by an F. Bull as early as 1758. [5]

Passages in plaster in the back of the shoulders and signs of white (paint or plaster?) in the more inaccessible folds, particularly under the cap.