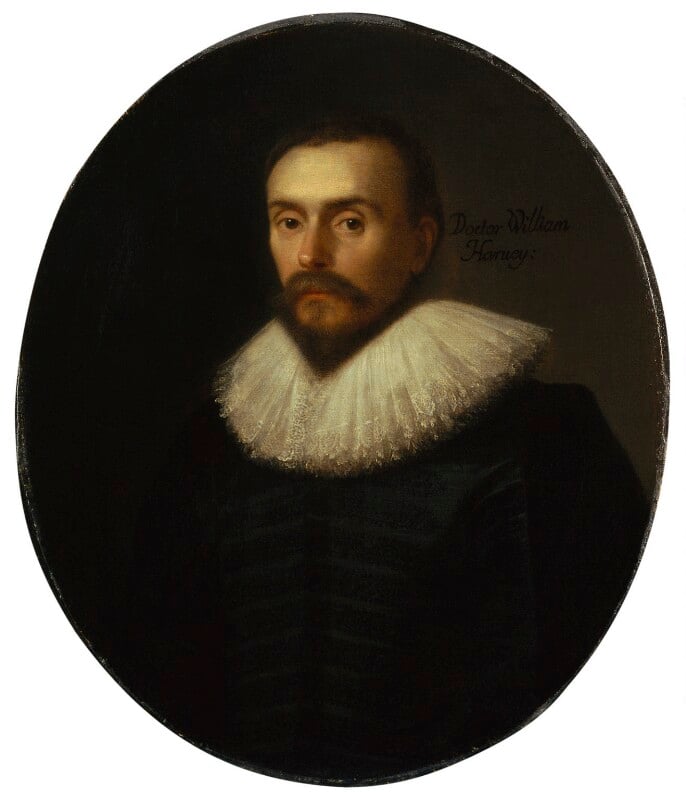 The earliest known portrait of Harvey, showing him at about the time he published the De Motu Cordis in 1626. Originally one of a set of eight portraits, showing Thomas Harvey (1549-1623) and his seven sons, at Rolls Park, Essex, set in rococo plaster frames, [1] a provenance confirming the identity. After many years of neglect, recognised by Keynes in 1948.
The date of c.1627 is supported by costume, the apparent age of the sitter and by the fact that the oval portrait of Harvey’s brother Daniel, formerly at Rolls Park and clearly by the same hand as NPG 5115, is dated 1627. The attribution to Mytens, suggested by Malcolm Rogers, seems entirely plausible; [2] Mytens was made Court Portrait Painter in 1622, when Harvey was physician-extraordinary to the King.
A modern copy by Caroline Romer is in the Harvey Grammar School, Folkestone.

By descent at Rolls Park, Essex, from Eliab Harvey, the sitter’s brother, to Andrew Lloyd (a lineal descendant); illegally exported to America 1959 (as an ‘unknown gentleman’); bt. Dr Myron Prinzmetal, Beverley Hill CA; purchased from the Prinzmetal Estate 1976, with the help of Dr William Gibson of the Department of the History of Medicine, University of British Columbia, Jacob Zeitlin and Gonville and Caius College, Cambridge.