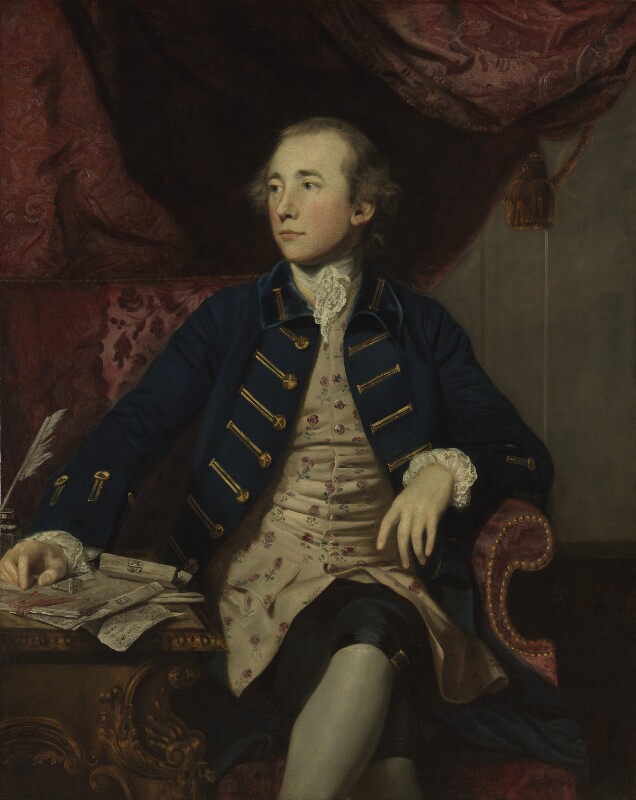 Painted during Hastings’s stay in England between June 1765 and March 1769. He had come back from his first period in India a widower and in poor health, to find his young son had died in England; when he returned to India in 1769 his London clothes were too small. [1] In 1766 Reynolds’s pocket books list appointments for Hastings on 3, 7, 12 and 18 March, 14 and 28 April, 5 May and 19 June; a further appointment occurred on 9 February 1767. The portrait was paid for on 9 October 1766 and cost seventy guineas. [2] Ribeiro has commented on Hastings’ semi-formal attire, his clothes of different colours and fabrics: the blue silk and woollen coat with a velvet collar, the black velvet breeches, and the printed cotton (probably Indian) waistcoat. [3]
It is not clear who first owned NPG 4445. It appears that Hastings did not take it back to India, [4] since Watson’s mezzotint, inscribed Warren Hastings Esqr, Governor General of Bengal, &c & &c, was not published until 20 March 1777, after Hastings’s activities in Bengal had excited public interest.
A portrait described as Hastings by Reynolds, now untraced, was bought in 1868 by Graves from ‘Holmes of Birmingham’ and sold to Edward Akroyd. [5]

1 Joan Lancaster of the India Office (letter of 16 March 1966 in NPG archive) wrote ‘I am told that the documents and the seal (very stylised) appear to be Persian’. Christopher Gandy (note of 21 April 1986 in NPG archive) commented that in India at this time such seals were ‘usually inscribed in Persian letters including the owner’s English name’.

[Presumably the portrait of Hastings by Reynolds ‘sold under an extent from the Crown’, Squibb’s, 21 June 1817, lot 111] G. Watson Taylor by 1823; his sale, Robins, 15th day, 25 July 1832, lot 148, bought Newton, who sold it to the 2nd Baron Northwick; by descent at Northwick Park to Capt. E. G. Spencer Churchill; accepted by the Government in lieu of tax from the Spencer Churchill Estate and allocated to the NPG 1965.