5 of 47 portraits of Warren Hastings 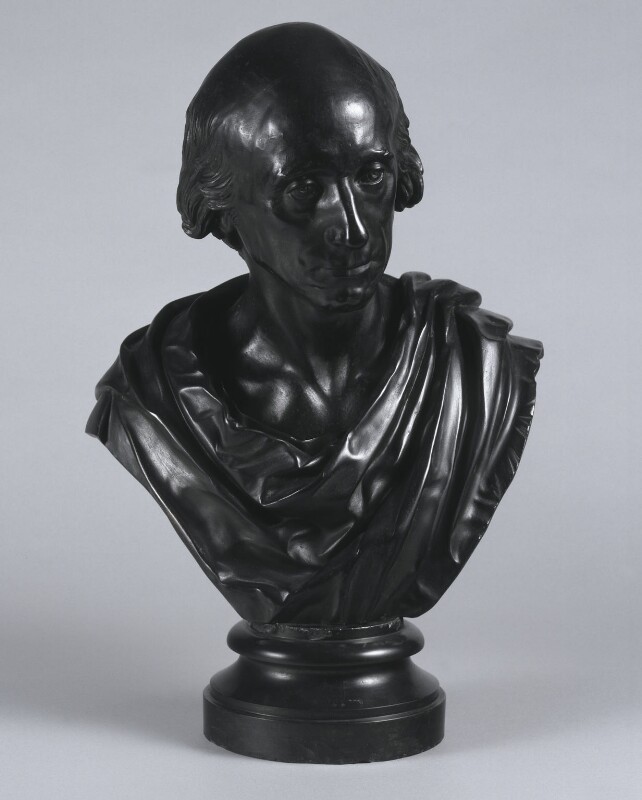 Banks ‘entertained the highest veneration’ for Hastings, frequently expressing his admiration ‘of the fine expression of his features, and more particularly of the uncommonly grand form of his forehead, which, with that of Horne Tooke, he considered the finest he had seen in modern heads’. [1] Hastings had promised to sit to Banks in December 1789, and sittings are listed in his Diary between 1 and 5 February 1790, the 5th being ‘the last day’, when the model was presumably completed. Hastings paid Banks ‘for the bust & 5 casts £73.10.0’ on 14 April 1791. [2]
This first bust by Banks was produced in two forms, the marble with the shoulders complete, and the bronze with the shoulders cut, as NPG 209. The marble, dated 1790, belongs to the India Office (British Library); [3] a terracotta is in the Victoria Memorial Hall, Calcutta, and another was with Mrs Shortt in 1938; a bronze cast (bearing the inscribed date 1790), was sold Christie’s, New York, 16 April 1994, lot 1, and a plaster also belongs to the India Office (British Library). [4]
NPG 209, differing from the preceding with its cut shoulders, is dated 1794 and appears to have been the subject of two letters from Banks to Hastings. On 27 December 1794 he wrote: ‘I have at last succeeded in Obtaining a Cast of yr Bust in bronze, tho not altogether to my mind I beleive it is as good as can be got done at any London foundry - the expences attending the making three or four Moulds & the casting & repairing together, make it necessary for me to charge you thirty five pounds ...’. On 9 January 1795 he wrote again saying he had begun the bronze ‘by advice of Mr Cockerell who thought I might get something by sending some to India & I imagin’d it might be your wish to have one also & therefore made trial but finding the doing them attended with a good deal of trouble & expence I have giv’n up the idea of sending any to India & if I have been under a Mistake with respect to that which I sent to yr house I am willing to withdraw it’. [5] A plaster cast was presented to Westminster School by a descendant of Cockerell. [6]
Banks produced a second marble bust for Lord Lansdowne in 1796, the right shoulder bare, the socle inscribed INGRATIA PATRIA (Foreign Office; GAC 2680/1). [7] Sittings were given in October and December 1796; a profile engraving by T. Gaugain (from a drawing by Simon de Koster) was published 10 October 1797 and another by the same artists showing a full-face view was published in 1798. [8] The ‘Bust of Mr Hastings’ exhibited at the RA in 1799 (1081) was presumably of this second type. On 12 January 1798 Banks told Hastings he had ‘but one cast from the last Bust I made of you’ and a new mould costing five guineas was required.
An ‘original’ terracotta of one of Banks’s busts was in William Tassie’s sale, Christie’s, 12 July 1805, lot 207. A plaster cast from an unspecified model by Banks belonged to Captain D. M. Anderson in 1935. In Banks’s sale, 22 May 1805, lot 5 was a ‘Mask of Mr Hastings’; lots 53 and 54 were busts of Hastings in terracotta; lot 55 another with ‘the Mould of Ditto’, and lot 56 ‘Ditto in different Drapery, and Mould of Ditto’. In 1792 Banks had also modelled two chimneypieces for Daylesford, incorporating Persian and Indian motifs. [9]

[Warren Hastings; his godson Warren Hastings Frith of Lesley, Hants.];1 John Marshall of Southampton, who had purchased it ‘a few years ago from a family related to [Hastings]’,2 from whom purchased 1866.