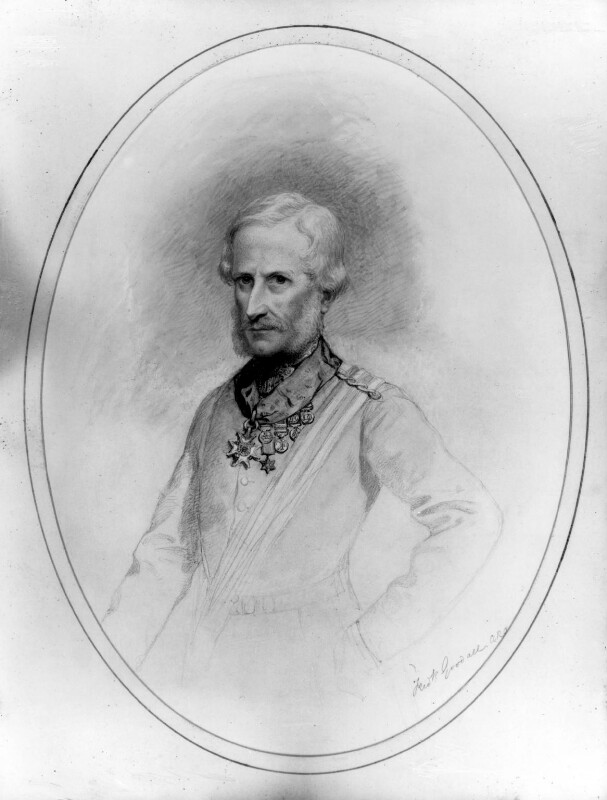 Signed (lower right): Fredk. Goodall. A.R.A.
Inscribed below (under the mount): Goodall A.R.A.
On the backboard is a label for the 1897 exhibition.

Havelock is shown in military uniform, with the badge and ribbon of the Bath, and various medals (Cabul, 1842, Ghuznee, etc). Goodall records meeting Havelock on several occasions at the home of a mutual friend, Mrs Howard Williams. At the request of Mrs Williams, Goodall drew a portrait of Havelock, after his departure for India, with the aid of photographs and his own recollections of the departed hero:

'About twelve months afterwards, when Lady Havelock had recovered from the first shock of her husband's death, she called upon me at Camden Square, to thank me personally for having painted the portrait. "It is," she said, "the only likeness of him in existence". She had to content herself with a photograph of it, as Mrs Howard Williams could not be persuaded to part with it for any money. When Behnes, the sculptor, received the commission to execute the statue for Trafalgar Square, Lady Havelock begged him to use my portrait for the likeness.' (Reminiscences, pp 369-70)
Further information about Mrs Williams and the subsequent history of the picture is contained in two letters from her stepson, Layton Eyre, 1934 (NPG archives). The NPG drawing was engraved by W. H. Mote (example in NPG), for W. Brock, Biographical Sketch of Havelock (1858), and by H. Adlard (example in NPG), for J. C. Marsham, Memoirs of Major-General Sir Henry Havelock, K.C.B. (1860). The exposed area of the NPG drawing, not covered by the mount, has noticeably darkened.