1 of 5 portraits of William Hazlitt 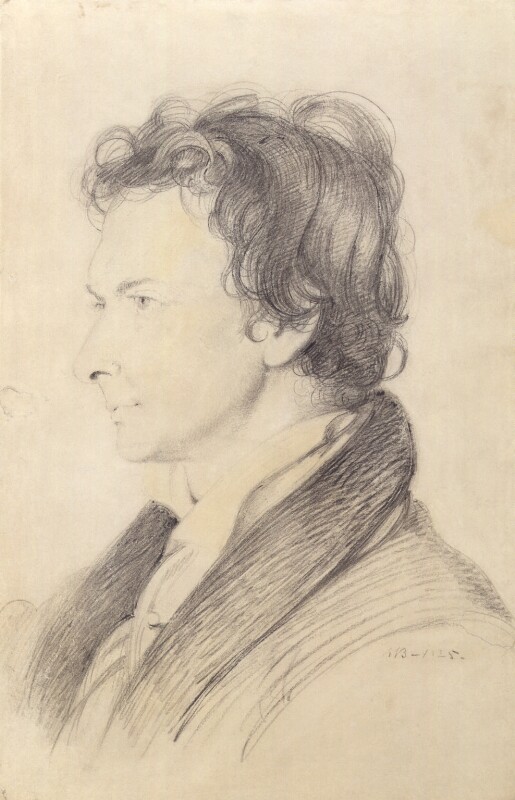 The drawing is one of two replicas of an original ad vivum portrait done in Scotland in 1824 and now in the Maidstone Museum, acquired in 1909 with other family portraits as part of the William Carew Hazlitt bequest (his grandson). The other replica belonged to Sheridan Knowles who wrote a sonnet 'Written on seeing Bewick's Chalk Drawing of the Head of Hazlitt - Thus Hazlitt looked! there's life in every line!' Knowles's replica was offered to the NPG in 1945 and appeared later at Sotheby's.
The original sitting is described by Bewick himself (Thomas Landseer, Life and Works of William Bewick, 1871, I, pp 165-7): 'In 1824 I received an invitation from Mr Hazlitt, who was staying at Melrose on a marriage tour, to meet Mr Sheridan Knowles [then proprietor of the Glasgow Free Press]. When Knowles had left us, I made the chalk drawing of Hazlitt, size of life, still in my possession ... Mr Hazlitt, whilst at Melrose, was writing a criticism upon Lady Morgan's Life and Times of Salvator Rosa for The Edinburgh Review, which he laid aside in good-humoured willingness to sit for me. He seemed highly amused and pleased to have the sketch made and wrote a paper upon "The pleasure of sitting for one's picture". During dinner he was gracious and smiling, and asked me to put up the portrait for him to look at. I stuck it up with a fork at each corner into the wainscot over the mantelpiece opposite to him. He frequently laid down his knife and fork to contemplate the likeness, gazing earnestly and long, asking if really his own hair was anything like that of the drawing. Mrs Hazlitt exclaimed, "Oh, it is exactly your own hair, my dear". It reminded him of Raphael's cartoon heads; "Ah!" he said, "it is something to live for, to have such a head as that." Hazlitt's grandson says that he sat to Bewick several times and that the drawing shows him 'without a neckcloth ... as it should be, for Mr Hazlitt seldom wore a neckerchief in the house' (Memoir, I, xvii).
He also says that the sitting took place in Glasgow in 1822 when Hazlitt was introduced to Bewick at a Shakespeare Club (Four Generations, I, p 178), but Bewick's own account, confirmed by the dates of Hazlitt's publications, is more likely to be the correct one (P. P. Howe, Life of William Hazlitt, 1922, pp 336-7).
The early provenance of the NPG replica is uncertain, though the Rev Lemon Redfern believed that his mother had been connected with Bernard Barton, the Quaker poet and Lamb's 'busy bee'; it may have belonged to him (letters from Redfern 1931-4 in NPG archive).

Rev J. Lemon Redfern and sold by him to the NPG 1934; previously it belonged to his mother who probably inherited it from Bernard Barton.