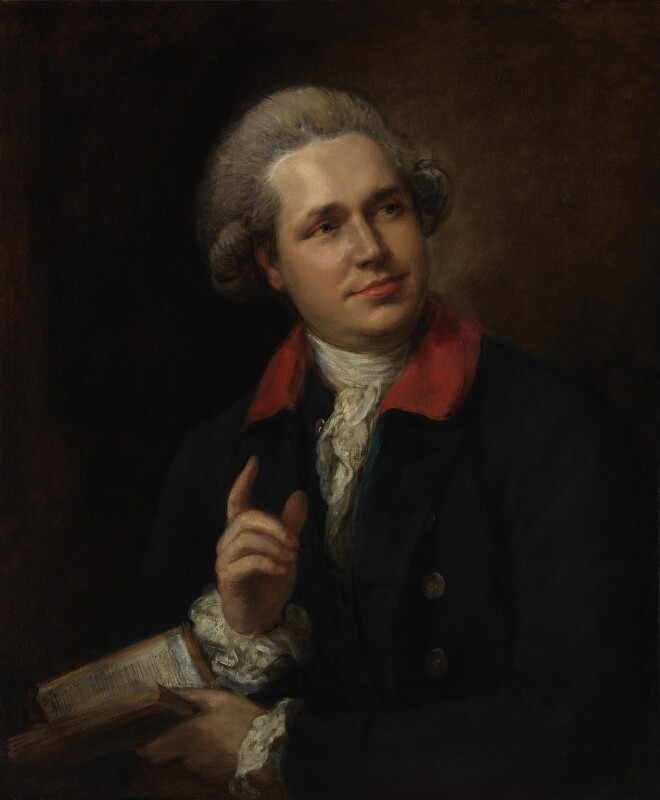 Gainsborough and Henderson had met at Bath, where Henderson made his stage debut in October 1772. Gainsborough came to admire his ability and, from the 'sincere desire I have of seeing you a great and happy man', urged him to study Garrick as much as he could and not to 'eat so devilishly'. [1] Three letters from Henderson mention portraits by Gainborough. On 3 August 1773 he told John Palmer, the manager of the Bath Theatre, that Gainsborough was ‘a varlet. He promised me a miniature from the picture of mine, but wits and genius, if they get nothing else from the Court, learn their d-d tricks of promising and forgetting’; [2] on 24 February 1775 he asked Mrs John Ireland if she had yet seen his picture at Gainsborough’s: ‘I intend it for my dearest Jack [John Ireland], [3] because I think it very like ...’, [4] and on 12 February 1777 he wrote from Bath to John Ireland: ‘I hope too, that Gainsborough will let you have my head – don’t you think it’s a very fine likeness.' [5] The first letter appears to confirm a portrait of 1773 (though strictly speaking not necessarily by Gainsborough); the others confirm a portrait or portraits by Gainsborough in 1774-75 and 1776-77. These letters have hitherto been taken to imply two portraits, one of 1773, the other of c.1777, [6] but there is much confusion.
Two may be identified today: NPG 980 and one known only through a half-length oval engraving by John Jones published on Henderson's death in 1789 (which appears to show an older head). As described below, an untraced portrait by Gainsborough of Henderson 'studying' was exhibited at the RA in 1780, and two further portraits, somewhat resembling this 1786 engraving , have been attributed to Gainsboorugh. [7]
Although no longer in prime condition, it is clear that NPG 980 was a freely-handled, informal portrait (the book has no legible text), and probably that mentioned by Henderson in 1773 and 1775; stylistically it could easily belong to Gainsborough’s late Bath period. [8] Waterhouse however believed it might be a portrait painted in 1777 and shown at the RA in 1780. [9] It remains unexplained why it was not engraved until 1783 (for what easily the most impressive print of Henderson). Two versions are recorded: one in the Treat Gallery, Bates College, Lewiston, Maine, the other, called Gainsborough Dupont, was with Ehrich, New York, in 1933.

By descent to the sitter’s granddaughter, Miss Julia Carrick Moore, by whom presented 1895.

1 There is no portrait of Henderson by Reynolds; G. W. Fulcher, Life of Thomas Gainsborough, 1856, p 218, listed the British Institution portrait as Gainsborough, and the provenance of NPG 980 implies that it was the portrait in question.

1 Described as In the collection of the Henderson family.