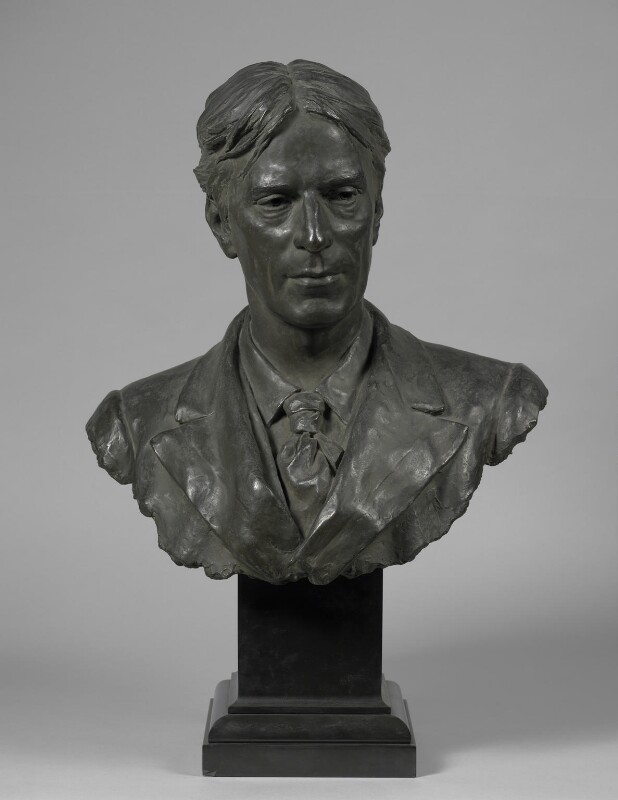 Signed and dated behind left shoulder: ‘E.Onslow Ford 1896’;
incised on back: ‘Hubert Herkomer’.

In 1877 the artist first produced a bust of the sitter in terracotta (NPG 6196) and his return to the same task nearly twenty years later resulted in this portrait in bronze, of which two castings are known. It was shown at the Royal Academy in 1897, by which time the sitter was a celebrated figure who had served as Slade Professor of Art at Oxford.

Though no close friendship is recorded, by the 1890s Edward Onslow Ford and Herkomer were fellow-Academicians. Owing to Herkomer’s attitude to productivity, it is likely that the bust was modelled during mutual sittings, with Herkomer drawing Ford at the same time for the portrait exhibited in 1898. [1] If so, sittings for the bust evidently began in 1895, and the incised date is that of its casting.

At the 1897 RA exhibition, Ford showed five other portrait busts, including heads of John Everett Millais, Herbert Spencer and actor George Alexander, which led one critic to note the sculptor’s ‘extraordinary power of seizing and realizing individual and transient expressions without descending to caricature’. [2] According to The Times, ‘of the best portraits, Mr Onslow Ford contributes very many; for he seems, with praiseworthy zeal, to be “taking off” his colleagues in turn, and this year gives us Mr Herkomer, Mr Briton Riviere and ... Sir John Everett Millais’. [3]

There is no information on the provenance of NPG 2461 before 1930, when its then owner, William Reynolds Stephens stated that he had ‘recently’ acquired it ‘for a very small sum’. [4] The other known cast, now with Bushey Library, [5] was presumably owned by the sitter or a neighbour/colleague. A modern fibreglass copy cast by David Perrett is in Bushey Museum.