1 of 12 portraits of Sir William Herschel 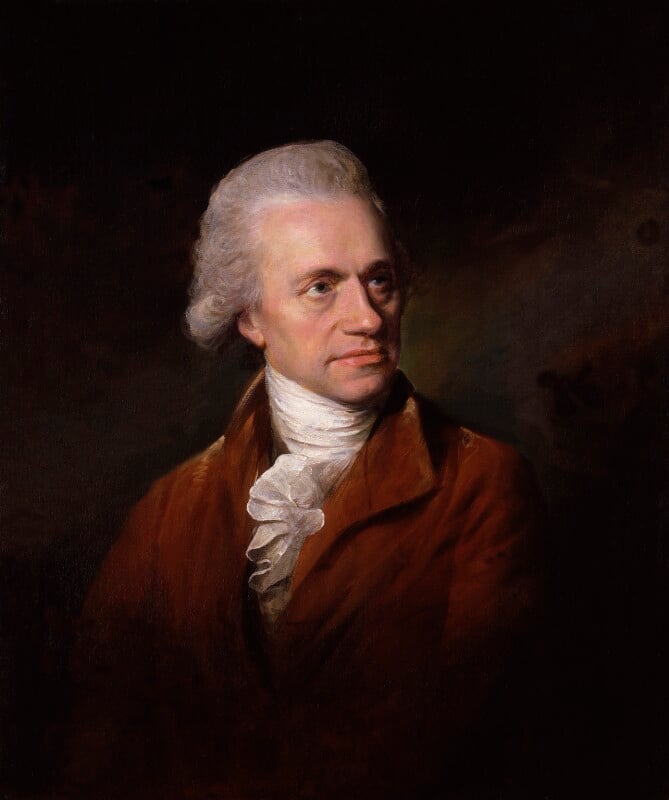 The artist for this portrait was suggested by Herschel's friend, the naturalist Sir William Watson, who wrote to him on Christmas Day 1784 warmly recommending Abbott: 'When you are in town on full moon nights you may perhaps spare an hour early in the morning, & may set three or four times running - & the thing may in this way be done without much inconvenience or loss of time' (Herschel MSS W.1/13/(T) - 2/1.4 in the Royal Astronomical Society archive).
It was seen half-finished in Abbott's studio by Caroline Herschel who, though confused about both artist and date, said years later that 'it was reckoned to be an excellent likeness' (Anthony J. Turner, Portraits of William Herschel, section D1). It was acquired by Watson himself who died in 1787, and was inherited by his son Dr William Watson of Pulteney Street, Bath, who lent it to Thomas Ryder for the engraving published in 1788.
Years later, probably at the time of Dr Watson's death c.1825, a Bath dealer, Robert Walker, passing his house in Pulteney Street, stopped to buy 'a portrait of a gentleman' at a furniture sale then in progress. A strange story was then related by Walker's son: 'On the third night after it was bought my father had a startling dream. He told me that a man resembling the picture approached his bedside and said, "You seem anxious to know who your picture represents, so I will give you my name, which is Herschel." My father immediately awoke, jumped out of bed, and wrote letters to Messrs. Colnaghi and other printsellers for an engraving of Sir William Herschel. A week later my father received one taken from his picture with Herschel's name on the plate …' The story was told at a Toc H meeting in Cornwall in 1938 by a grandson, Joliffe Walker, and sent to the NPG by the local vicar, the Rev Sir John Herschel (letters in NPG archive).
Versions: oil replica in Victoria Art Gallery, Bath, probably painted for the Bath Literary and Philosophical Institution; watercolour copy by Charles Ford c.1860 in Holburne Museum, Bath (20); chalk copy by his granddaughter Lady Gordon, of the head only, used as frontispiece to Lubbock's Herschel Chronicle.

(1) Oval stipple by Ryder lettered: Painted by Abbott/Engraved by Ryder/GULIELMUS HERSCHEL LL.D: RSS./Sidera cuncta not at tacito labentia coelo/Vir. Aeneid Lib, 3/From an Original Picture in the Possession of Wm. Watson MD : FRS./Published as the Act directs Feb. 11 1788 by S. Watts No 28 Walcott Place, Lambeth. (2) A. J. Turner in his monograph lists 11 engravings and copies.