2 of 12 portraits of Sir William Herschel 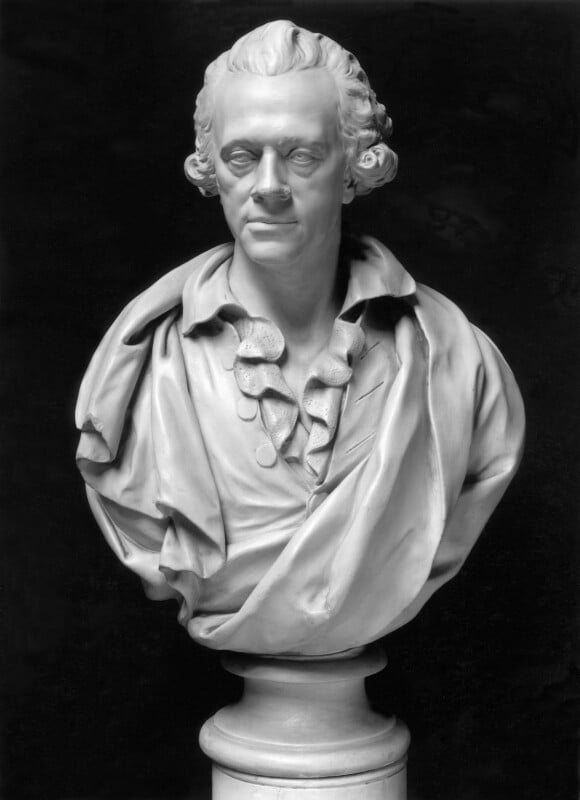 The bust was commissioned by Sir William Watson and, according to Caroline Herschel's autobiography, executed (probably from a life-mask) between April and October 1787: 'My Brother's bust was taken by Lockie according to Sir Wm Watson's order. Professor Wilson and my Brother Jacob were present.' She added a further account later on: '... and an awful piece of business it was to see a Mass of Gips poured by handfuls on the face of my poor Brother - the head leaning on the back of a Chair at an angle of 45, I believe with 2 straws in the nose to prevent suffocation ...' (Anthony J. Turner, Portraits of William Herschel, section H1).
No marble bust is recorded but Lochée exhibited a bust, probably this one, at the RA in 1788. Watson intended to bequeath both mask and bust to the Royal Society but they were still in Lady Watson's house in Bath in 1841 and came back into the Herschel family at her death. Lochée's bust and Baily's plaster bust of Sir John Herschel were bought as lot 466 at the Herschel Library sale Sotheby's 4 March 1958, removed from Observatory House, Slough (see Richard Ormond, National Portrait Gallery: Early Victorian Portraits, 1973, pp 224-5).
The Wedgwood green dip jasper ware medallion at Barlaston is also almost certainly by Lochée though it is heavier in treatment than the bust. It was listed in an inventory of the contents of books, pictures etc in the sitting-room of No.376 Braunschweiger Strasse, Hanover, as 'Medallion of Wm H. by Lockie of 1787' (Mrs John Herschel, Memoir of Caroline Herschel, 1876, p 349).

Family possession and by descent to Mrs E. D. Shorland (niece of Sir John Herschel, 3rd Bart) and her sale at Sotheby's 4 March 1958 (466) bought Leggatt for the NPG.