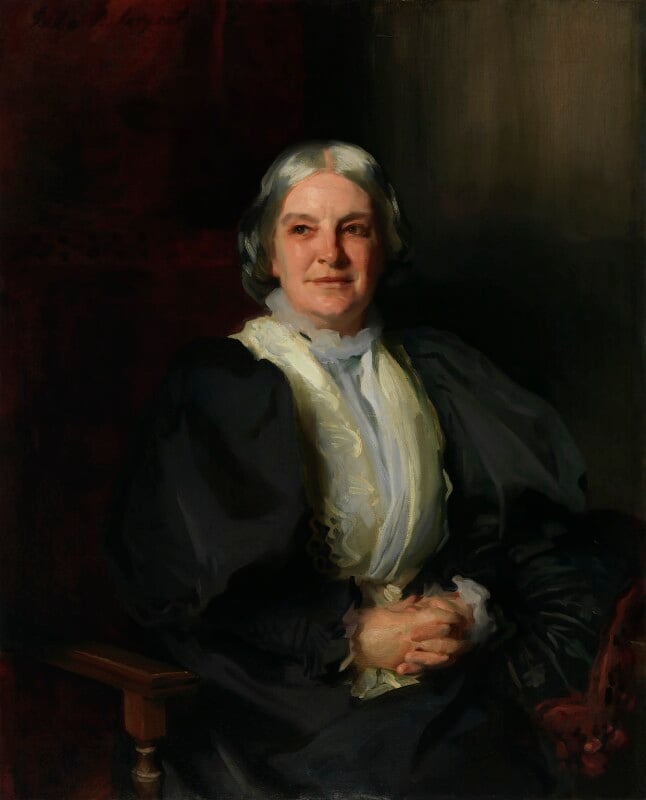 This portrait was commissioned by a group of Hill’s supporters led by Charles Stewart Loch and Lady Frederick Pollock, [1] on the occasion of her sixtieth birthday in 1898. She was initially reluctant to agree to the portrait, insisting that funds could be better spent. Having previously resisted such tributes, even refusing to allow any block of buildings to be named after her, Hill wrote anxiously to Loch arguing that it was ‘almost impossible … to prevent memorials, presentations and testimonials … from becoming a real oppression and pain to the contributors’. [2] However, as E. Moberly Bell records, ‘Octavia … could not always have her own way. There comes a point when to refuse to friends the opportunity of expressing their affection and appreciation in the way they desire, becomes ungracious and ungenerous. Octavia could never be either.’ [3] On 1 December 1898, the portrait was formally presented to the sitter at Grosvenor House, in recognition of her substantial achievements. By this stage her housing schemes, publications and work for the poor had garnered her an international following: the list of subscribers to the portrait was almost 200 names long and included many individuals from the United States of America. [4] Hill took the presentation as an opportunity to express her hopes for the future: ‘When I am gone [she said] I hope my friends will not try to carry on any special system, or follow blindly in the track which I have trodden. New circumstances require various efforts; and it is the spirit, not the dead form, that should be perpetuated.’ [5]

John Singer Sargent was at this time at the height of his powers as a society portraitist. His reputation as the painter of an international elite grew throughout the 1890s and by the middle years of the decade, such was the demand that he was painting up to three sitters a day. [6] In some respects Sargent was a strange choice for this commission, the glamour of the artist’s brush perhaps not quite in accordance with the humility and reserve of the sitter. Merlin Waterson postures that ‘her plain brown dresses offered little scope for Sargent’s slick technique’. [7] Indeed, Octavia was ‘a believer in want as a stiffener of character and lived strictly and abstemiously herself’. [8] This was outwardly reflected in the frugality of her dress, which Romilly Ouvry – Hill’s great-nephew – remembered as ‘absolutely terrible’. [9]

Sittings for the portrait, undertaken during August and September 1898, presumably took place in Sargent’s studio at 33 Tite Street – the Italian 17th-century-style chair in which Hill sits is likely to have been one of Sargent’s studio accessories. [10] Inevitably, matters began awkwardly. Mary Booth recalls that Octavia ‘retained a certain personal shyness with strangers, putting down a veil, as it were, between her own personality and theirs and hardly allowing a glimpse of herself to show through’. However, the artist employed his considerable experience to break through these defences: ‘He engaged her in conversation, and had the happy instinct to differ with her categorically on a point where she felt strongly … her face lit with all her characteristic force and fire.’ [11] Sargent translates something of this spirit in the kindly yet determined expression of his sitter. It is not known whether the artist provided some of the garments that Hill wore for the sittings. Certainly there are photographs showing the sitter in her later years wearing lace collars and cuffs (See ‘All known portraits, Photographs, early 1900s’ and ‘1907’), but not quite to the extent that appears in Sargent’s work, nor to the same effect. [12]

Contemporary reaction to the portrait was mixed on its exhibition at the Royal Academy in 1899. A critic for the Spectator praises the success of Sargent’s bold handling with regards to the sense of immediacy and vivacity he imparts: ‘One cannot but pity the numbers of people who in their search for what they call “honest work” will overlook the picture to fix on some tiresome accumulation of petty details miscalled “finish”.’ [13] A reviewer for the Magazine of Art agrees that in Sargent’s portraiture ‘The veracity is startling and the handling brilliant amongst the most dashing bravura passages ever executed’, but adds ‘there is a lack of that repose in these faces and figures which alone makes a picture delightful to live with, just as there is a lack of that repose in the paintings which alone makes the execution a continuous delight to study’. [14] Yet in the case of NPG 1746, it is arguably the vigorous nature of the brushwork employed to render the torso that contrasts so effectively with the more sensitive treatment of the head, imbuing a sense of serenity and composure to his depiction of the facial features: ‘the painter’s magic reveals a face illuminated by an expression of graciousness which only the painter’s art can arrest and fix … This beautiful portrait of a woman by Sargent, so full of dignity, makes one regret deeply that no portrait of the Queen has come from his brush.’ [15]

The black sleeves and the mass of white lace around the face and neck and wrist were perhaps old-fashioned even then. Yet beneath the wide brow, silvered with parted hair, the eyes glow with a fire that has nothing of old age in it. They express ardour and something more. These are very sane eyes, shrewd, serene and kindly, but eyes which you feel nothing could escape. The large mouth and chin are those of a very determined person – but for the suggestion of a humorous twist at the corners. Beyond question a capable face – capable also of righteous indignation. Sargent’s portrait betrays a man’s sense of her power.

However, he qualifies his praise with the following observation: ‘Those who remember her feel this to be an authentic likeness – but not the whole Octavia … we miss something of the sympathy that lives within those eyes; the enthusiasm which could kindle others.’ [16] Hill highlights the generally held opinion that although an impressive picture, as a likeness Sargent’s oil did not quite capture the essence of the sitter. Harriot Yorke – Hill’s companion from 1878 – commented that Octavia ‘never looked sideways and almost all accounts refer to her enormous dark eyes and penetrating gaze’. [17]

Sargent was interested in the framing of his paintings and during the 1890s in London, showed a taste for using antique frames for his commissions. For Hill’s portrait he chose a carved frame of leaves and fruit, probably 17th-century Italian, a style widely fashionable at the time. Although the majority of his portraits were housed in modern frames, it is possible that the frame for NPG 1746 was chosen after the painting’s completion, as it was altered to fit the canvas. One can imagine Sargent discovering a frame which he believed complemented the work; he describes a similar situation in a letter to Sir Andrew Agnew in 1893, regarding the portrait of his wife: ‘Today I saw an old frame which I think might suit the picture’. [18] Gillian Darley notes that the frame for Hill’s portrait was Sargent’s gift, ‘his own contribution to the celebration of a life of such extraordinary achievement’. [19]

At the presentation ceremony in 1898, Charles Booth ‘thanked Sargent for his noble work and expressed the same wish [as the previous speaker] that the picture might one day belong to the nation’. [20] This was indeed to be the case; it was bequeathed to the National Portrait Gallery by Octavia Hill and accepted by the Trustees in February 1915. [21] Sydney Cockerell, acting on behalf of Hill’s sister Emily, successfully petitioned the Trustees to waive their usual practice of leaving an interval of 10 years after the sitter’s death before accepting a portrait. [22] In a letter to Cockerell, Emily S. Maurice (daughter-in-law of F.D. Maurice) explains: ‘Personally I do not admire the portrait, so I am not so very anxious that it should be accepted; but so many people wishing it to be in the gallery, and Octavia having left it for that purpose one wishes to carry out the plan.’ [23] Writing to NPG Director Charles Holmes regarding copyright for the picture, Sargent himself acknowledges this action: ‘I’m glad to hear that Miss Octavia Hill is received into Valhalla.’ [24]

There are three known painted copies of the Sargent oil: an oil on canvas by Reginald Grenville Eves, copied at the NPG between 2 December 1920 and 31 January 1921, as recorded in the Register of applications to copy portraits, NPG 77/5 (National Trust, 32 Queen Anne’s Gate, London, 35180); a copy by Trixie Glover (Octavia Hill Birthplace Museum, Wisbech, Cambridgeshire); and by an unidentified artist (Octavia Hill Society of Philadelphia).

Bequeathed by Octavia Hill to the National Portrait Gallery, accepted by the Trustees February 1915.