19 of 31 portraits matching these criteria: 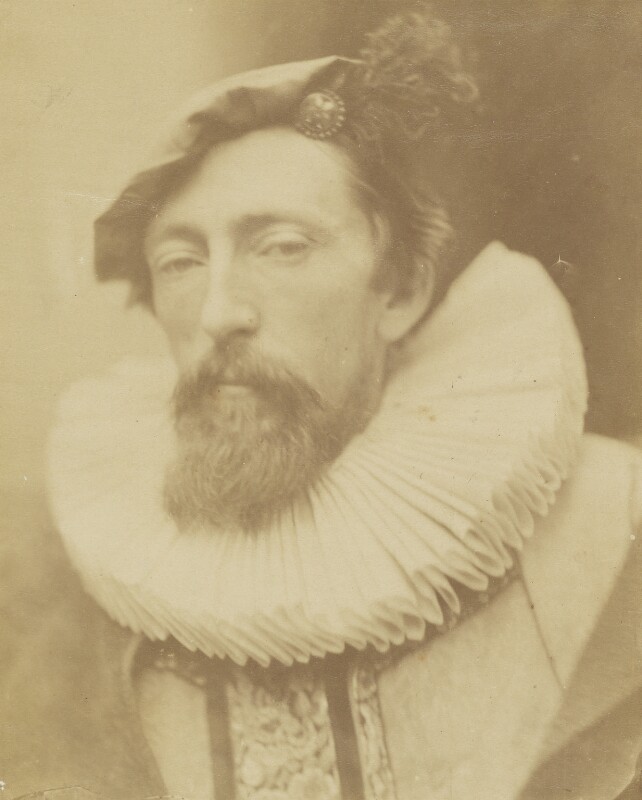 This photograph was created during the 1860s for David Wilkie Wynfield’s series of artists portrayed in historical and contemporary costume, many of which were released for sale from March 1864 under the title The Studio: A Collection of Photographic Portraits of Living Artists, taken in the style of the Old Masters, by an Amateur. Wynfield photographed Hodgson twice, in slightly different costumes. Here he wears a soft cap with brooch and feather and large starched ruff over a doublet. The image was registered by Wynfield on 8 December 1863, which appears to be shortly after the photograph was taken.[1]

In an alternative version of the image held at the Royal Photographic Society, Bath (1995), Hodgson is turned slightly further to the left, wearing what appears to be the same cap at a different angle, with feather projecting forwards. In place of a large ruff, he wears a smaller, high collar, possibly starched lace, and a wide silk or satin stole over his left shoulder. This print is inscribed ‘The Lord John Hodgson of the North, after Holbein’. In general terms both costumes are derived from Tudor portraiture.[2] The large ruff is, however, more characteristic of the late sixteenth century, as in the portrait of Sir Francis Drake (NPG 4032) of c.1580.

The choice of costume appears to have been Hodgson’s, as other references to him in the early 1860s indicate. In caricatures by Frederick Walker and Henry Stacy Marks, he is depicted in sixteenth-century costume (see ‘All known portraits, By other artists, ‘1863’ and ‘c.1864–5’), while in a mural executed in Hodgson’s studio by members of the Clique, he was shown full-length wearing the cap and ruff of NPG P74. According to Marks, ‘one winter season Sunday mornings were devoted to the decoration of the walls of Hodgson’s painting-room, which was not a regular studio but two ordinary rooms knocked into one [at] 5 Hill Road, Abbey Road’. With one exception, the subjects painted were all ‘Shakespearean’; over the fireplace Philip Hermogenes Calderon painted Hodgson and his wife in Elizabethan costume.[3]

Both Hodgson and Wynfield were original members of the St John’s Wood Clique, together with Calderon, Charles Leslie, William Frederick Yeames, George Adolphus Storey and Marks.[4] Hodgson also appears in Wynfield’s more informal photographs of the group taken outdoors in the early 1860s. Both men were also members of the Artists’ Rifles.[5]

For the alternative image of Hodgson in the series by Wynfield, see ‘All known portraits, Photographs, 1863’.

Victorian Worthies, Alexander Gallery, London, 1976 (3): it is not clear which of two known versions was exhibited.