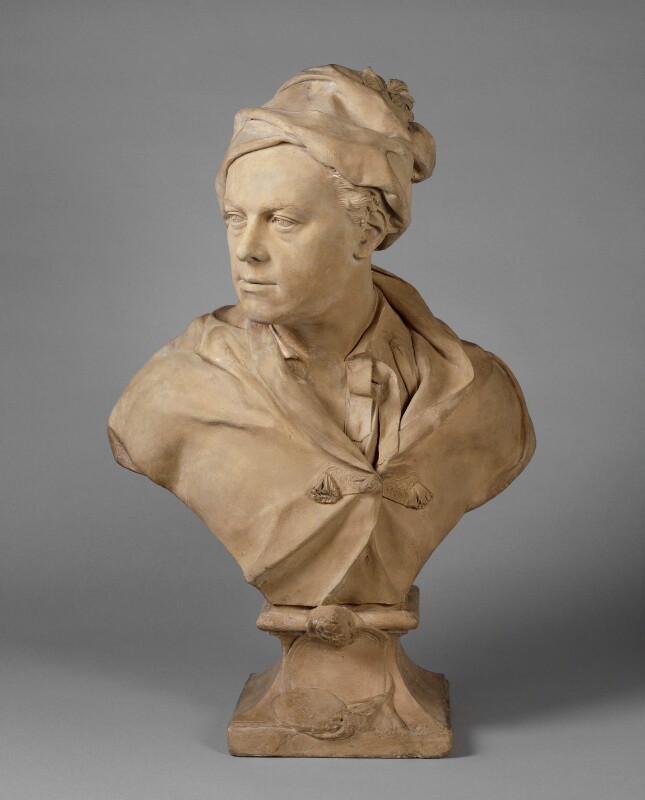 Presumably the bust described by Vertue between 2 June and October 1741: ‘Mr. Rubbilac Sculptor of Marble -besides several works in Marble - moddels in Clay. had Modelld from the Life several Busts or portraits extreamly like ... Mr. Hogarth very like'. [1] The bust is unique; no marble is known and, due to cost, none is likely to have been made unless commissioned. One of Hogarth's dogs, although not mentioned by Vertue, was also modelled by Roubiliac, [2] possibly at the same time as NPG 121 and certainly by c.1745-47, the date given on style and workmanship to a copy in Chelsea enamel surviving in the collection of T. G. Burn. A Chelsea white porcelain version, now in the Victoria and Albert Museum, is unlikely to be later than 1750. [3]
Three Hogarth dogs, all pugs, can be identified. 'Pugg' was reported missing on 5 December 1730 when its owner advertised a description and offered a reward in The Craftsman [4]: 'a light colour'd Dutch DOG, with a black Muzzle'. 'Trump' named by Ireland [5] and best-known of the artist's pets, is likely to be the terracotta of lot 58 in the posthumous sale of Mrs Hogarth's property and may also be represented in Hogarth's self-portrait, 1745, in the Tate Gallery. Another pug called Crab, [6] known in the 1750s, is probably the dog painted out in NPG 289.

Three-quarter face, pupils incised, near-vertical scar over his right eyebrow, hair brushed behind his left ear, large loose cap with tassel just visible on top; open shirt with collar ribbon hanging down, loose coat fastened by a single button, with frogs and tassels; the base is decorated with a blank shield surmounted by the head of a satyr(?), palette and brushes beneath.