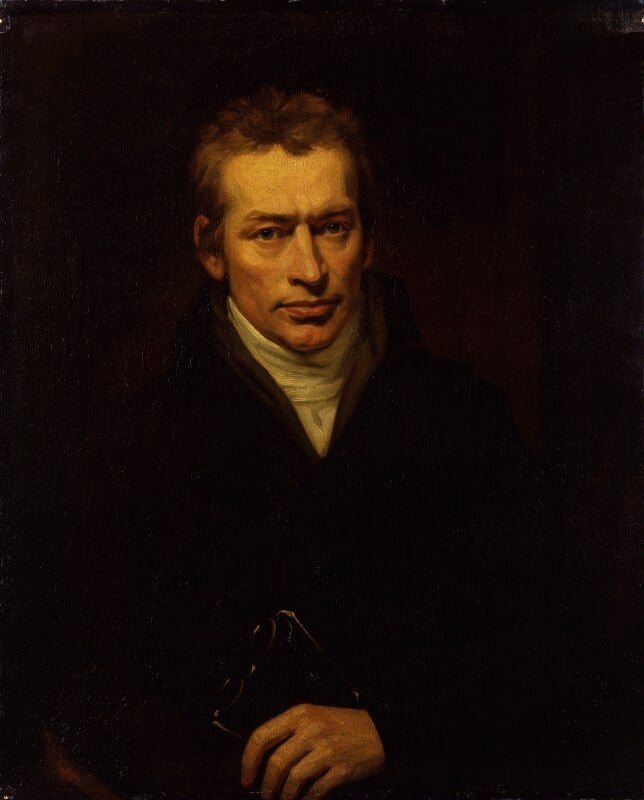 Opie who was a friend of Holcroft and advised him in his art-dealing ventures, seems to have painted four portraits of him:
(1) c.1782 (NPG 3130). This shows the sitter aged slightly under 40. It had belonged to Mrs Holcroft who, after her second marriage, gave it to Francis Place 'in memory of kindnesses shown by him to her husband' (J. Jope Rogers, Opie and his Works, 1878, p 110). Francis Place bequeathed it to his son-in-law John Miers FRS whose son Sir Henry Miers bequeathed it to the NPG in 1943.
(2) c.1798 (Godwin's). Holcroft's diary records 26 June 1798 'called at Opie's in the evening; sat near two hours', and again 15 July 1798 'Sir William B[eechey], with his young son called … B--- praised my portrait, painted by Opie, but said the colouring was too foxy' (Memoirs, 1926, pp 229 and 239-40). The following year, 30 January 1799, he records 'Mr G[odwin] has a portrait of me painted by Opie which was exhibited last year, a most admirable painting and likeness' (Memoirs, 1926, p 298). A letter from Godwin's daughter, Mary Shelley, to Mrs Kenney (Holcroft's widow) discusses offering it 'to Mme le Mergez for £25 as it is my Father's express wish that it should not be brought to the hammer' (undated letter from M. S. in NPG archive).
(3) 1799 (Colonel Barry's). Holcroft records over a dozen sittings to Opie January-March 1799 beginning 30 January 'set to Mr Opie, first sitting for my portrait, intended for Colonel Barry'; on 9 March 'the morning so clouded after a fall of snow that it was too dark for him to paint, in the present almost finished state of my portrait' (Memoirs, 1926, p 298). Barry was satisfied and gave Opie a draft on his banker (Ada Earland, John Opie and his Circle, 1911, p 285). Either this portrait or no.2 was sold by Mrs Cox at Christie's 18 July 1891 (83).
(4) c.1804 (NPG 512). Holcroft only kept a diary during 1798-9 so there is no record in the Memoirs (completed by Hazlitt) of a sitting for this portrait which shows him about 20 years older than in the first. It was given by Opie to Holcroft's widow, Mrs Louise Kenney, who gave it to his daughter, Louise Baroness Mergez, who offered it to the NPG in 1860 when it was declined because she was unable to state a price. It was sold to the NPG in 1878 by Mrs Kenney's son C. L. Kenney who said 'the picture has been in the family ever since it was given by Opie the painter to my mother whose first husband Holcroft was and has never been touched since it left his easel. It is a very fine specimen of Opie's portrait painting as I think you will agree' (letter to Scharf 14 August 1878 in NPG archive).

Given by Opie to Mrs Holcroft; her stepdaughter Baroness Louise Mergez; her brother C. L. Kenney who sold it to the NPG in 1878.

Mezzotint by Hodgetts published April 1816; stipple by Blood published as frontispiece to his Memoirs (ed. Hazlitt 1816).