1 of 5 portraits of Frank Holl 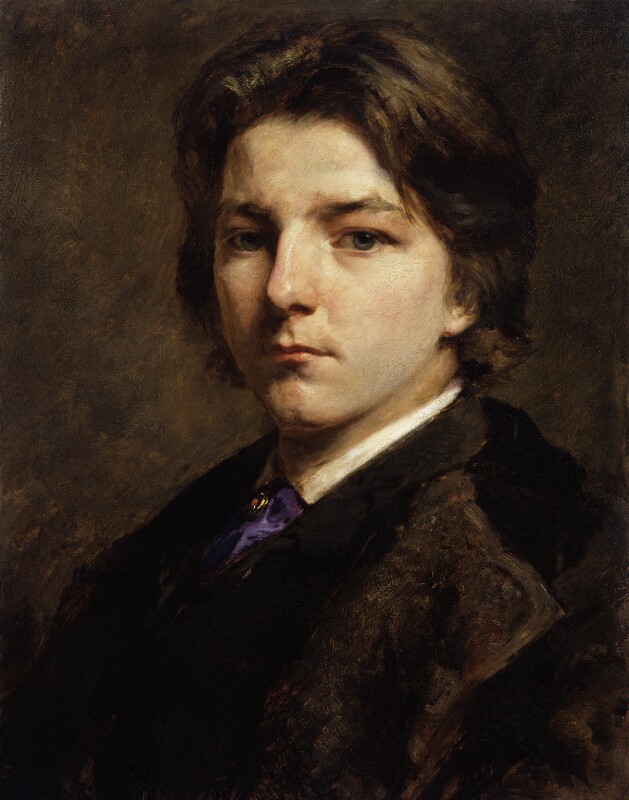 Frank Holl first exhibited at the Royal Academy in 1864 with a subject picture (526) and ‘A portrait’ (145),[1] which has been identified as NPG 2531. It attracted much interest, especially when it was realized how young the artist was. Holl’s daughter wrote:

The picture [no.526] was well hung and favourably noticed but a head portrait of himself which he exhibited at the same time drew much attention to the young painter as being far above the ordinary level of students’ work. The late John Pye, the then eminent engraver, being very much struck with the work, wrote to the boy’s father, asking him to bring his son to see him […] Unfortunately, when the invitation was received, my father was ill in bed from the effects of a strain at cricket […] the crusty old gentleman, doubtless considering that his condescension had not been sufficiently appreciated, wrote retracting the offer, afterwards even refusing to see the boy when he called to explain and apologize.[2]

The portrait was painted in 1863, when Holl was eighteen and had won RA Schools silver and gold medals. The portrait is a remarkably mature exercise in self-scrutiny, and the dark, tonal palette one that he favoured all his life. The scale is also significant. Years later, in an address to art students in 1888, he stressed the importance of working large: ‘I strongly advise you never to neglect the opportunity of painting heads life size. It is the greatest possible practice in your art that you can have […] I don’t think I can impress upon you too strongly the great advantage you will find to taking every opportunity of painting these life-sized heads’.[3]

Professional portrait painting came relatively late in Holl’s brief career, however. His portrait of Samuel Cousins (exh. RA 1879) was the turning point after which he became increasingly interested in this branch of art. A.M. Reynolds also cites an influential visit to Holland and his discovery of Rembrandt in 1881.[4] Some reviewers were critical of this departure, and friends such as Luke Fildes rallied round when the Telegraph criticized the move away from subject painting.[5] As well as NPG 2531 there are a further eight portraits by Holl at the NPG.[6]

The early self-portrait had sentimental value for the family. It belonged to Holl’s widowed mother after his death, and later to his brother Edgar whose widow offered it to the NPG in 1932.[7] It was shown soon after Holl’s death, in 1889 and 1891 (see ‘Exhibitions’) but apparently was not reproduced. Nor was it illustrated in A.M. Reynolds’s biography (1912) or subsequently, and it remains a little-known gem of mid-Victorian portraiture.[8]