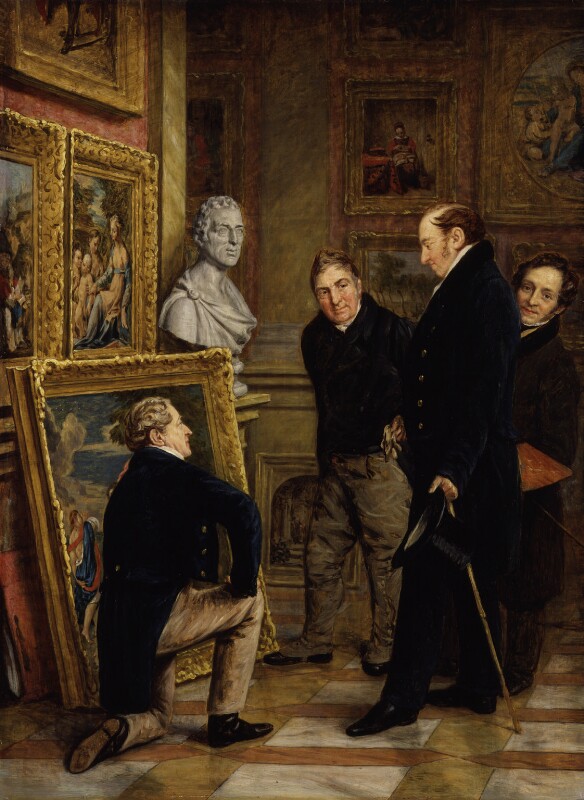 Old labels on the back indicate the sitters' relative positions.

The four groups (NPG 792-5) are preliminary studies for a large picture of an imaginary gallery hung with pictures from famous collections in England. The idea was conceived by General Sir John Murray who already owned a similar picture by Gonzalez Coques, probably a version of the famous Coques Picture Gallery in the Mauritshuis, of which a variant is at Windsor Castle and others were well-known at the time. Lord Egremont owned one by Teniers, of the Archduke Leopold's Gallery. Murray commissioned Pieter Wonder to paint its English companion with the collectors grouped in the foreground and about 40 well-known Old Masters hanging on the walls. Pieter Wonder came over from Holland in about 1822 under Murray's aegis and exhibited in London 1823-31, his last work being at the British Institution 1831 (345) - 'An Interior of a Picture Gallery with Portraits 5ft 7in x 7ft 4in', presumably the finished work for which the groups are studies.
In the final 'Imaginary Gallery', Taylor's Parmigianino appears in the same place, above his head, and his Roubiliac bust of Pope nearby. Taylor had had an important mixed sale in his Cavendish Square house (Christie's 13 June 1823) which included 'the finest female Picture in the world', Mrs Siddons as the Tragic Muse by Reynolds, bought by Lord Grosvenor and now in the Huntington Library; his Four Seasons by Teniers was bought by Peel (NG 857-60) and a Parmigianino Altarpiece was bought by Holwell-Carr for the British Institution and presented by the Directors to the National Gallery in 1826 (NG 33)
In the final picture appear Holwell-Carr's Garofalo St Augustine (NG 81), Storm by Dughet, then believed to be Poussin (NG 95) and Christ Teaching by Luini, then attributed to Leonardo (NG 18). Holwell-Carr bequeathed a large group of pictures to be placed with the Angerstein Collection, including his own portrait by Jackson (NG 124).
Murray commissioned the final picture from Wonder and in front of him high above in the 'Imaginary Gallery' hangs his Christ as Victor over Sin and Death, later in the sale of Lady Murray's effects at Christie's in 1852 and finally acquired in 1890 by the Musée des Beaux-Arts, Strasbourg. Portraits of Murray himself by Wonder are reproduced in J. W. Niemeijer, 'P. C. Wonder in Engeland' in Bulletin van het Rjksmuseum, 1965, plates 7-9.
An art critic reviewing the exhibition at the British Institution in 1851 where the final picture appeared as no.345 'An Interior of a Picture Gallery with Portraits', complained that Murray and his friends were in deep shadow, ending with a feeble pun: 'under such circumstances it would have required a miracle to insure success: as it is, however, the performance is a wonder' (Literary Gazette, 19 February 1851).

George Watson Taylor in black coat and grey trousers kneels before Titian's Bacchus and Ariadne, bought by the National Gallery in March 1826. The Rev William Holwell-Carr stands to left in black frock-coat and baggy grey trousers. Sir John Murray in dark blue coat with brass buttons, black trousers, holding top-hat, cane and gloves, stands as the dominant figure in the group; he commissioned the final picture itself from Pieter Wonder who stands behind in dark brown studio coat holding palette and mahlstick. Beside them is Angerstein's bust of Wellington by Nollekens, replaced in the final picture by busts of Milton and Locke. Several recognisable pictures hang on the walls, slightly altered for the final picture: the legs of Velazquez's Olivares, St Augustine by Garofalo (NG 81, Holwell-Carr bequest), Madonna and Child with St John and the Magdalen by Parmigianino, then belonging to George Watson Taylor and now in a private collection in England (see 'A Parmigianino Discovery' by Clovis Whitfield in Burlington Magazine, CXXIV, May 1982, reproduced in colour, and Eliot W. Rowlands letter to Burlington Magazine, CXXV, June 1983); on the far wall are: Girl Peeling Apples by Maes (Metropolitan Museum, New York), Cattle in Meadow with Willows by Paul Potter (Westminster Collection) and a famous Madonna and Child with St John by Raphael (Hermitage Museum, Leningrad); above Wellington's head is Woman with Spaniel by Metsu, then in the Stafford Gallery, and on the floor behind Holwell-Carr is the Duke of Westminster's The Visitation by Rembrandt.