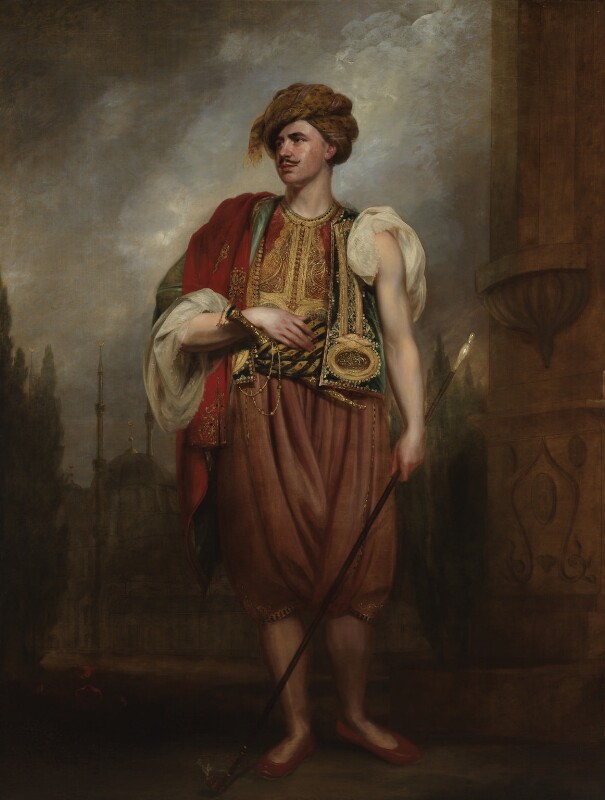 The portrait reflects Hope's passion for the East and especially Turkey and Constantinople where he spent a large part of his travels as a young man, discarding both his Christianity and his European dress. Two of the richly embroidered waistcoats he wears in Beechey's portrait were given to the NPG by Hope's great-granddaughter, Mrs H. W. Law, in 1968. The lure of Turkish dress can be seen in portraits of many fashionable women of the early 18th century, eg Lady Mary Wortley Montagu (see John Kerslake, National Portrait Gallery: Early Georgian Portraits, 1978, pp 190-1) and the mode continued with portraits of Hope's brother (in Greek dress 1805) and wife (1826) both by Lawrence; and no doubt Phillips's portrait of Byron owes a good deal to Beechey's Hope.
The portrait hung on the main staircase in Duchess Street with an enamel copy by Henry Bone nearby (C. M. Westmacott, British Galleries of Painting and Sculpture, 1824, part I, p 215); Bone's pencil drawing for this enamel is in the NPG (Henry Bone’s annotated pencil draws for miniatures and enamels, II, 92) inscribed: Thomas Hope Esq after Beechey for himself Decr 1804 (erased) 1805; two watercolour copies by G. P. Harding are in the British Museum (Laurence Binyon, Catalogue of Drawings by British Artists … in the British Museum, II, p 261). A variant by Adam Buck 1805 in the Society of Dilettanti collection has a different costume and a felucca on the Bosphorus in the background.