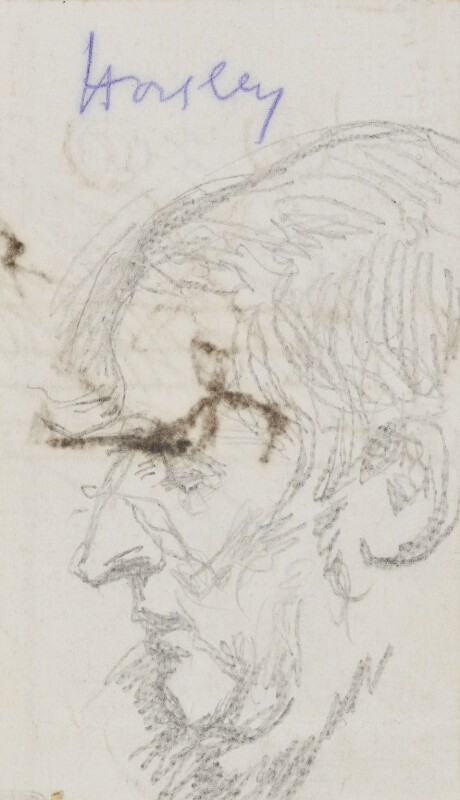 NPG 3182(2) is part of a collection of sketches of artists acquired by John Postle Heseltine at the Charles West Cope sale at Christie’s, 22 June 1894. Heseltine (1843–1929) was an etcher, collector and trustee of the National Gallery; he and Cope were fellow Etching Club members.

Heseltine had the nineteen sketches mounted in a leather album stamped ‘IN MEMORIAM’ (front) and with a motto and variation of the royal coat of arms (back).[1] The collection includes a mixture of drawings and pen and ink sketches on different pieces of paper, some cut very small, like the sketch of Horsley on p.2. Most are stuck on grey card and framed with painted wash borders bearing Cope’s name in a label. The Horsley sketch is hinged to show the pen and ink doodle on the reverse.[2]

It has been dated c.1862 by association with the dated sketches, some of which show views of the Royal Academy Schools where Cope was teaching. However, the album contains a wide range of drawings, some dated to the 1850s and 1860s, others not dated but clearly earlier.[3] Judging by Horsley’s appearance the sketch seems to belong to the 1860s–70s. It is the only known image that shows him wearing spectacles.

Cope was six years older than Horsley.[4] Their professional paths crossed while working on fresco commissions for the new Houses of Parliament in the 1840s; they travelled in Italy to study fresco technique.[5] Cope was made Academician in 1848, Horsley much later in 1864. They also worked actively for the institution, Cope as an art teacher (official visitor to the Schools 1861–6; Professor of Painting 1866–75), and Horsley in various administrative roles in later years.