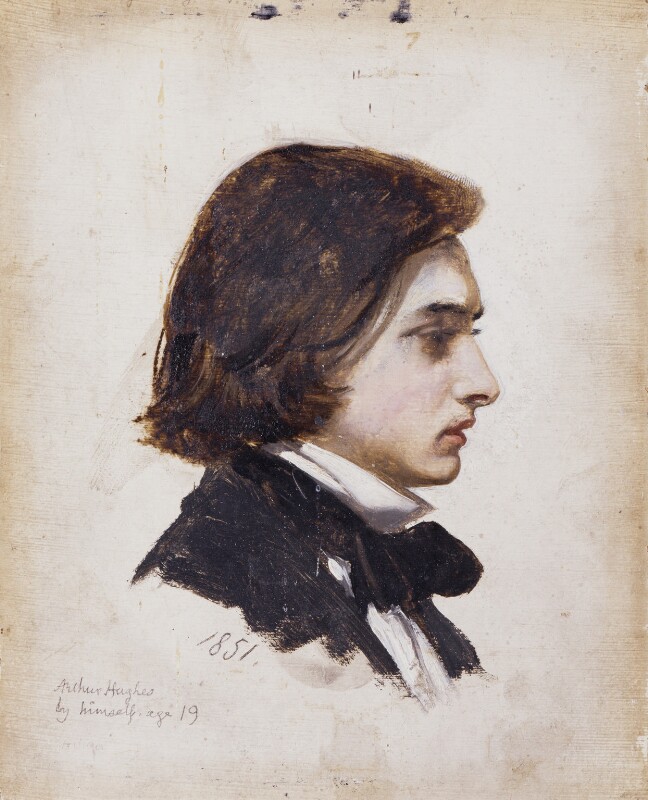 William Michael Rossetti’s affectionate description of Hughes in the late 1840s accords well with this slightly later self-portrait: ‘His face, giving evidence of his Welsh parentage, was singularly bright and taking – dark, abundant hair, vivid eyes, good features, and ruddy cheeks which earned him among his fellow-students the nickname of “Cherry”.’ [1] The freshness which characterized the young Hughes is skilfully rendered in the profile sketch.

In 1901 Arthur Hughes described the portrait, which was at the time in his possession, as painted ‘about 1850 when I was eighteen’, suggesting it was undated. [2] Crucially, a photograph commissioned by Hughes before 1901 from William Edward Gray shows NPG 2759 without the pencilled inscription (‘Arthur Hughes / by himself . age 19’), but with faint traces of a date under the shoulder. [3] When the portrait was acquired by the National Portrait Gallery in 1935, the date under the shoulder had been strengthened to ‘1851’, and it had acquired the pencilled inscription – which is apparently not in Hughes’s hand. [4]

The clean profile on a plain ground recalls the low-relief portrait profiles produced by the Pre-Raphelite sculptors Alexander Munro and Thomas Woolner at much the same time.[5] In fact Munro was one of Hughes’s closest friends in the 1850s; he introduced him to the PRB periodical The Germ in 1851 and they shared a studio in Pimlico from 1852 to 1858, occasionally using each other as models.