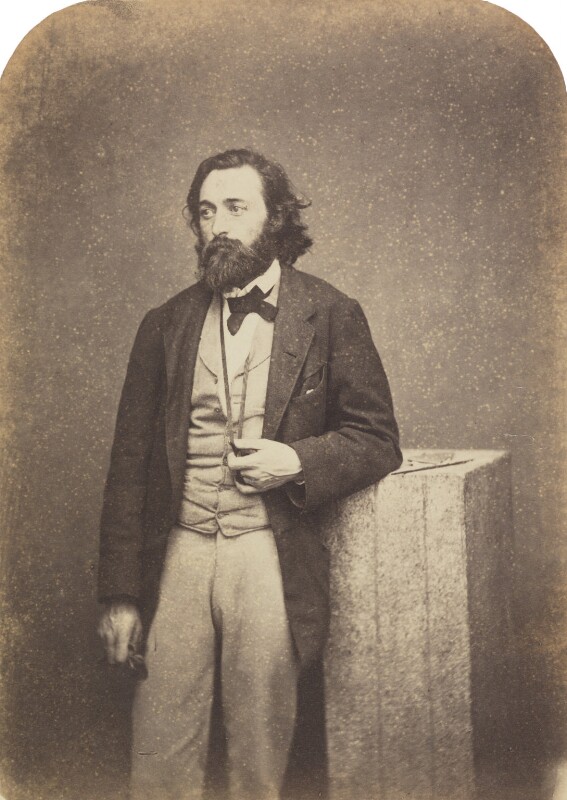 NPG P30, which has lost its original mount, was acquired in 1977 as a photograph possibly taken by Lewis Carroll (Charles Lutwidge Dodgson). Hughes’s appearance and dress are certainly similar to the photograph taken by Dodgson in 1863 (see ‘All known portraits’). However, cartes-de-visite showing Hughes in a second pose at the same sitting [1] bear stuck-on labels printed ‘W. & D. Downey’ and ‘South Shields’ on the back, and they are the basis for attributing NPG P30 to one of the Downey studios.[2]

William Downey started a photographic business in South Shields from about 1855, and traded there as W. & D. Downey from 1860. There was also a W. & D. Downey studio in Newcastle from 1863 to 1888. The Downey brothers went to London in September 1860 to take photographs of MPs and other prominent personalities, so it is just possible that NPG P30 was taken at Alexander Munro’s Pimlico studio then.[3] However, one of the cartes with the Downey label is inscribed by William Holman Hunt, ‘1858 about. Taken in ante room of Munro’s studio’.[4] A further carte showing Hughes (in the second pose) is in the collection of the descendants of Alexander Munro. It is reproduced in the Hughes catalogue raisonné where it is dated to the late 1850s.[5]

William Downey also came to London in June 1863 when he took photographs of Dante Gabriel Rossetti, John Ruskin and William Bell Scott in Rossetti’s house and garden.[6] However, there is no record of Hughes sitting on that occasion, and as a studio photograph NPG P30 is different to these more informal images.

A later date in the 1860s is just possible. The most important of Hughes’s northern patrons was James Leathart of Newcastle-upon-Tyne. Hughes worked for him between 1860 and 1878 and painted his family twice, in 1863–5 and 1878–9, travelling to Newcastle and Gateshead for the sittings.[7] Another artist patronized by Leathart, Ford Madox Brown, was photographed by W. & D. Downey in Newcastle c.1864.[8] The evidence points towards a similar date for the photograph of Hughes.

Through the Looking Glass: Photography and the Pre-Raphaelite Movement, Manchester City Art Gallery, 1986–7 (25).