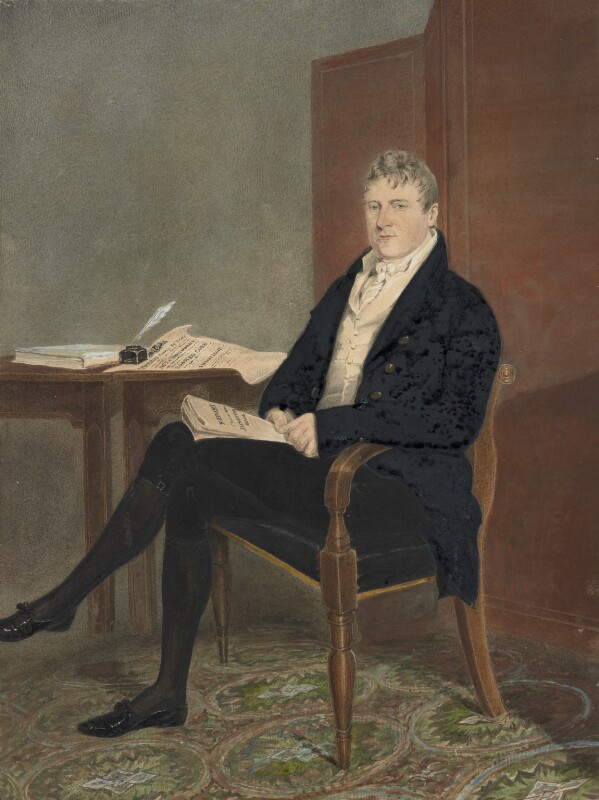 Nos.956 and 957 both arrived at the NPG in 1894 with the attribution to Adam Buck. NPG 956 is confirmed by Buck's etching in the series of 'Friends to a Constitutional Reform of Parliament'. The change of attribution of NPG 957 from Buck to Wiche is based on Holl's stipple engraving published on the day of Hunt's liberation from Ilchester Gaol where he had been imprisoned for two years after Peterloo. The Report refers to the discussion in the House of Commons on his ill-treatment in Ilchester Gaol, the paper to his prosecution by the Excise for manufacturing 'Roasted Corn' as a substitute for coffee - known as 'Radical Coffee'. J. Wiche, a London miniaturist, exhibited RA 1811-26 and RBA 1824-7 including several listed as 'Portrait of a Gentleman'.

Whole-length seated to left in a Regency armchair, dark blue tail-coat with brass buttons, black breeches, stockings and slippers, buff waistcoat, white neckcloth and bow-tie; grey powdered hair, blue eyes, pale complexion. He holds a paper: REPORT Committee Ilchester Gaol and on the table to left are a book, inkpot with quill and a paper: Whereas ... Act of Parliament ... Roasted Corn ... Henry Hunt. Red screen in background and on floor a green patterned carpet.