2 of 11 portraits of Leigh Hunt 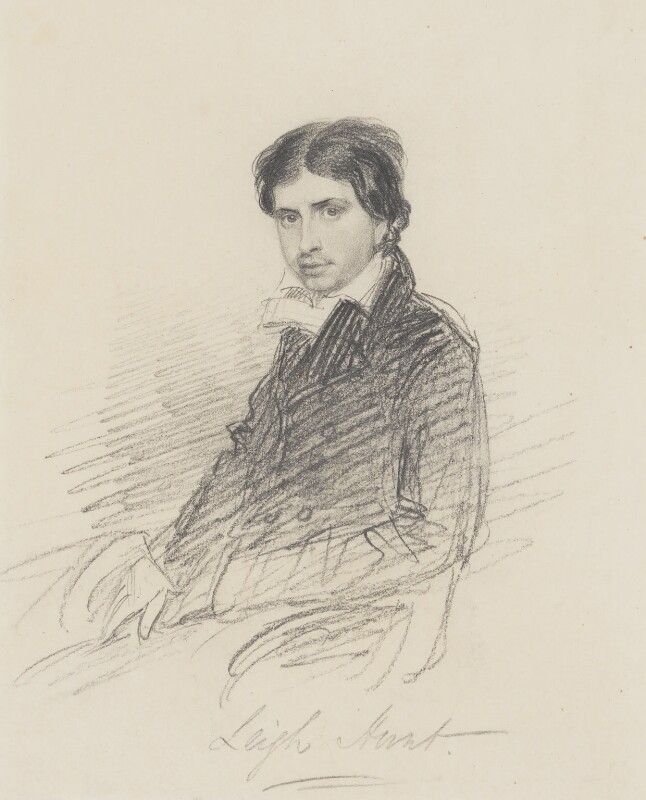 Signed: Leigh Hunt.
A torn paper removed from the backboard and inscribed in ink: Alfred & I calculated that this portrait of Leigh Hunt was taken by Wageman, at the request of our father, Vincent Novello, somewhere about the … [the year 1815] … the year that L. H. left … [Horsemonger Lane Jail] … oria C. C. [Mary Victoria Cowden Clarke] 1868/Photographed in Genoa, March 1868/M.C.C./ and in pencil: given to Valeria April 98.

The drawing has always been in the Novello family collection. It is mentioned in an inventory of pictures in the Cowden Clarke 'snuggery' at Craven Hill, made by Mary Victoria (Novello) Clarke (see Richard Altick, The Cowden Clarkes, 1948, p 85 and reproduced p 51). Leigh Hunt's great-great-great-grandson Richard Russell believed it to overstress the length of the nose but to be otherwise sympathetic and 'the only portrait to which that by Margaret Gillies can be said to bear any resemblance' (Richard Russell, 'The Portraiture of Leigh Hunt' in Keats-Shelley Memorial Bulletin, X, 1959, p 8).