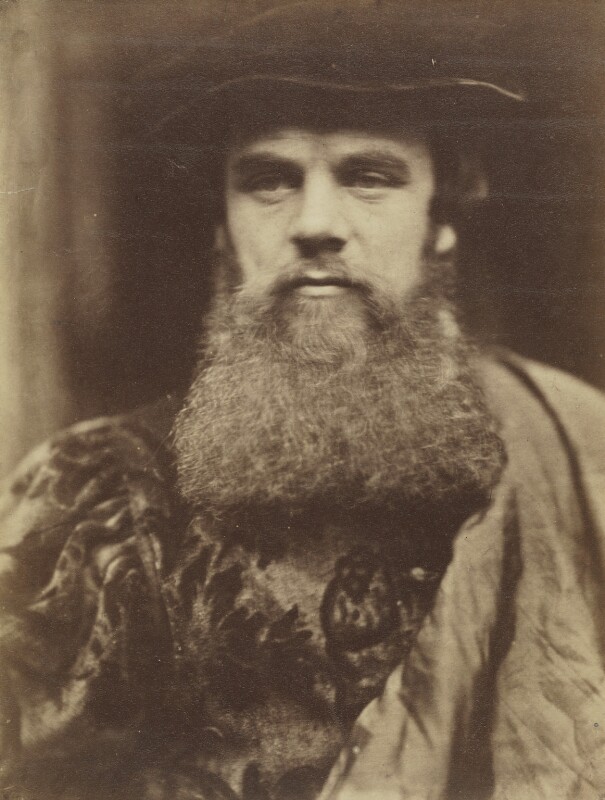 One of the large-format portraits taken by David Wilkie Wynfield, this was published in Part 4, ‘After The Venetian School’, of The Studio: A Collection of Photographic Portraits of Living Artists, taken in the style of the Old Masters, by an Amateur. It was not among those registered for copyright by Wynfield in December 1863, and perhaps dates from a few months later. Other sitters in the same edition were F.R. Pickersgill, Henry Wyndham Phillips and Frederick Walker. Both photographer and sitter were members of the 38th Middlesex Volunteer regiment (the ‘Artists’ Rifles’). A later photograph by Wynfield in the same style and format, showing a man in contemporary dress resembling Hunt but with a beard of more characteristic Victorian length and shape, is currently not considered to depict Hunt (see ‘All known portraits, Doubtful photograph’).

The fabric or garment of velvet or silk and brocade with sleeves gathered at the shoulder appears similar to that worn by George Frederic Watts and Thomas Oldham Barlow in Wynfield’s sequence, while the velvet cap could be the same as that worn by Pickersgill and Wynfield himself. While the silk and brocade fabric supports the allusion to Venetian painting, Hacking identifies Hunt as being in Tudor costume here. [1] Her observation may have been prompted by the distinctive blunt shape of his beard at this period. [2] Hunt was certainly interested in Tudor costume at this date: in 1862 he made detailed watercolour studies of the dress of Edward VI on display in the Special Exhibition of Works of Art of the Mediaeval, Renaissance and More Recent Periods at the South Kensington Museum, which he then used to design a costume for his nephew Teddy Wilson, seen in his painting The King of Hearts (1862–3). [3]