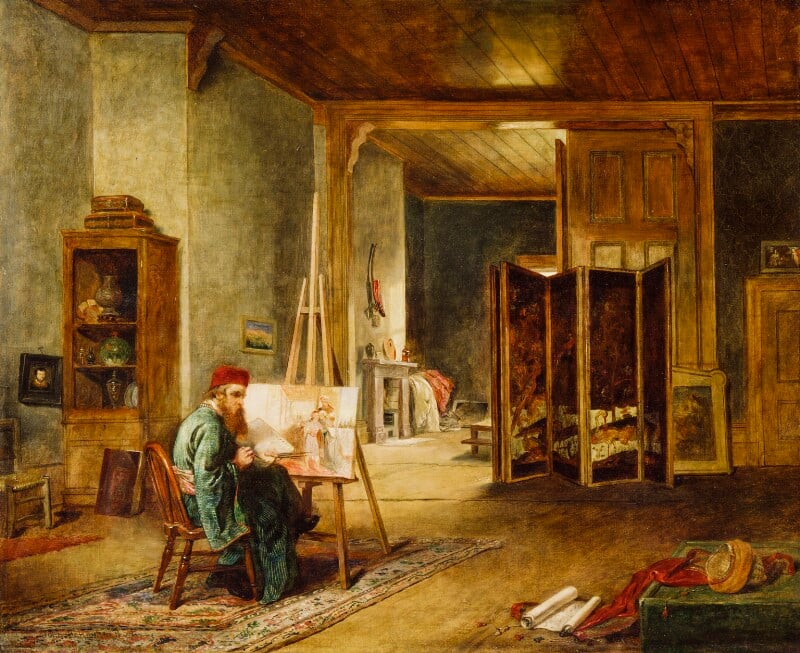 Inscr. in oil paint lower left: ‘John Ballantyne R.S.A’.
On lower stretcher, label: ‘No.18 / Holman Hunt / in his Studio / working on the /famous picture / The Saviour in the / Temple 1860 / by John Ballantyne / President Scottish Academy.’

Scottish artist John Ballantyne moved to London in 1863, part-way through a series of portraits of eminent male artists in their studios (see also portraits of Landseer, NPG 835, and Francis Grant, NPG 5239, with which the composition may be compared). Early in 1864, when eight (not including NPG 2555) were described as finished, Ballantyne’s aim was given as the creation of ‘memorials of some of the leading men of the age’. Each artist was being shown ‘in the act of painting one of his more prominent productions; his walls are covered with his sketches, while various “professional” accessories are placed carelessly, yet judiciously, about the room’. [1] The painting of Hunt is smaller in size than those of Landseer and Grant, perhaps as befitted a more junior artist.

Sitter and artist may have met through Millais [2] or the Artists’ Rifles Volunteer regiment; [3] previously Ballantyne had published a pamphlet analyzing the early Pre-Raphaelite deployment of hyper-realism. [4]

Hunt is depicted in his studio at 1 Tor Villa, Campden Hill,[5] and the painting appears to date from summer 1865. [6] He is seen at work on The Finding of the Saviour in the Temple (1854–60), the biblical painting that established his name. The larger version of this (857 x 1410mm) had been exhibited and sold in 1860,[7] but is indicated behind the folding screen; that shown on the easel is the smaller version (454 x 702mm), which though signed and dated 1862 in fact remained in a sketchy state until completion in summer 1865.[8] To Hunt’s right are an oriental scroll and turban, similar to items that appear in The Finding of the Saviour. In addition, Hunt is shown in a gown he had brought from Syria, which he ‘constantly used in his painting room’ [9] and regularly wore, for example when photographed by Julia Margaret Cameron and for the self-portrait begun in 1867 (see ‘All known portraits, Photographs, 1864’ and ‘Self-portraits, 1867–75’).

All the accoutrements were intended to show ‘the artist where most emphatically he is chez lui – in his atelier’, at work on an important painting. [10] They also testify to Ballantyne’s collaboration with the artists, who were invited to select the canvases shown and moreover to contribute ‘small repetitions of their own productions, which are represented on the easel’. [11] If the ‘sketches, or pictures in progress, on the easel or finished lying about framed’ had ‘in almost all cases been painted upon Mr Ballantyne’s picture by the artist whose studio is represented’, [12] it can be inferred that as well as selecting The Finding of the Saviour as a key work in his career, [13] Hunt himself supplied the sketched-in figures in NPG 2555. The other paintings shown are (far left) an unidentified portrait from an early date; (on wall above sitter’s head) a landscape that may represent one of Hunt’s but does not exactly accord with any known work; [14] and (above door on right) his copy of a copy of Titian’s Sacred and Profane Love. [15]

The paint is very thinly applied, revealing apparent underdrawing of ruled lines on the easel and elsewhere, with indistinct scoring-out to suggest patterned wallpaper to the right.

At the time of the portrait, Hunt was in his late thirties; despite the success of The Finding of the Saviour and exhibitions at the New Gallery in 1864 and 1865, he was dispirited, writing: ‘I have not made a reasonable sort of income for the last four years … My eyesight is not as good as before – my health is not so good … My spirits are not up to the old mark.’[16] A few months later, however, he was engaged to marry Fanny Waugh and planning to return to Palestine.

The work was exhibited with twelve other Ballantyne portraits in London at the end of 1865 by printseller Henry Graves. [17] Critical response was generally favourable. ‘The notion is good,’ noted the Athenaeum, ‘and there is, in all the pictures, something of personal fidelity and … so much of the character as makes the pictures interesting.’ [18] The Art Journal claimed it ‘would be difficult to overrate the value of such a series.… Posterity will owe a large debt to Mr Ballantyne for the legacy he will bequeath to artists and Art-lovers when hereafter they accord homage to the great men of the past.’ [19] According to the Illustrated London News, Holman Hunt was shown ‘in Eastern costume, eyeing, with significant concentration of attention, a Hebrew roll, a turban and other still-life, which enter into his picture of the “Finding of the Saviour”.’ [20]

Later responses to the sequence focus on ‘the fascinating glimpse into the lives, surroundings and working methods of successful Victorian painters … perhaps inspired by E.M. Ward’s earlier series of writers in their studies, Ballantyne was satisfying the insatiable curiosity of the Victorian public for insight into the lives of famous men, and the nature of their genius’. [21] The paintings are ‘highly significant as the first visual records of Victorian artists portrayed at work in their studios [which] provide the only or finest records of what these large and often impressive rooms actually looked like, and they eloquently capture a sense of how each artist worked’. [22] Darbyshire suggests that the portrait of Hunt deploys ‘the same spatial construction’ as that in The Finding of the Saviour, adding that this contributes to the ‘game of flattery’ involved in the whole enterprise. [23]

Ballantyne’s project may be compared with that of David Wilkie Wynfield as well as J.P. Mayall’s later photographic series of artists in their studios produced in 1883. Hunt is represented only in the former, in NPG P75. Some of Ballantyne’s portraits exhibited by Graves were published as large lithographs; [24] NPG 2555 was not thus reproduced. Exhibited in Edinburgh in 1867, it was apparently shown in another, unidentified location, as indicated by the old label, which also identifies Ballantyne, erroneously, as president of the RSA, when he was in fact merely a member, elected in 1860. In Scotland it was perhaps purchased by a relative of the Rev. Maughan-Ettrick, who offered it to the NPG in 1923 and from whose presumed heir it was purchased. [25]