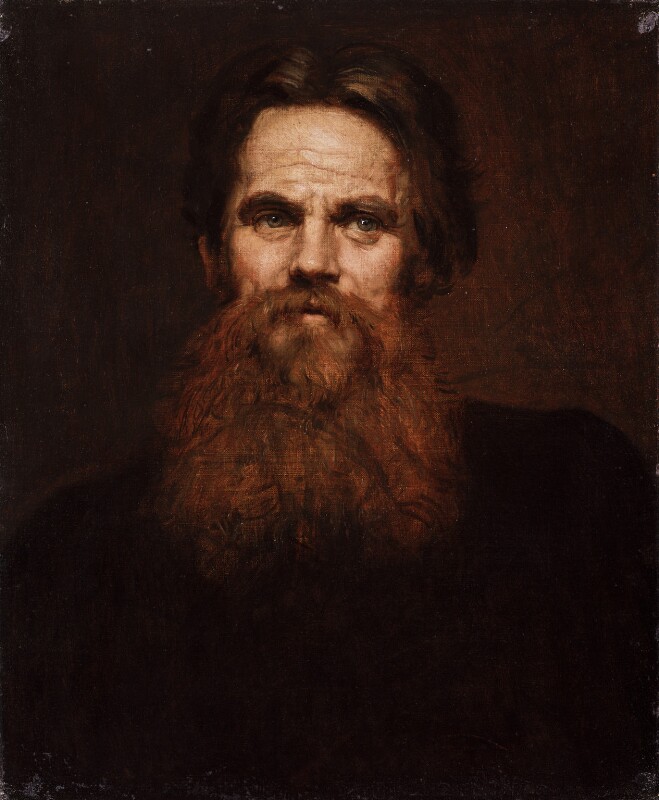 This is the earlier of two oil portraits of the same sitter painted by the artist two decades apart (see NPG 2803). William Blake Richmond, who first saw Hunt around 1852, met him personally in 1859 when – at the home of Charles West Cope – he recruited him into the Artists’ Rifles. Early the following morning Richmond called on Hunt, who was then at work on The Finding of the Saviour in the Temple. He recalled, ‘From that time Hunt and I became great friends and remained so till his death, I respecting and loving him as a great artist and a great and good man.’ [1]

Richmond was particularly struck with Hunt’s ‘beautiful golden beard’, which is a chief feature of this portrait, albeit shown with a tawny hue, in accord with a later memory of its owner having a ‘square jaw draped in red beard and moustache, while a mane of auburn hair, parted in the middle, hung over a high, broad forehead’. [2] Richmond added that Hunt’s eyes were arresting and ‘of a singular beauty, far-reaching, penetrating and strong, but without a trace of hardness in the expression, which illustrated his singularly pure and gentle nature’. [3] By adding the ‘wrinkled brow’ to the ‘powerful head’ of his sitter, [4] Richmond also gave Hunt an air of anxiety, which was ambivalently interpreted by his contemporary and friend Frederic George Stephens, who wrote that this was ‘the best, or at least the happiest portrait’ of Hunt, ‘for which the painter has seized a moment of highly animated expression and depicted it with so much frankness and tact that we cannot but congratulate him on having stopped his hand at that point’. Stephens also criticized the work for incompleteness, ‘flesh less clean than might be desired’ and undeveloped modelling. [5] The face is in fact the only ‘finished’ area; both the background and sitter’s body are dark and featureless and the beard is sketchily rendered.

The portrait, which Bronkhurst dates to about 1879, [6] and was probably completed over several months, shows Hunt in his early fifties, after he had suffered the loss of his first wife and the social ostracism that followed his marriage to her sister. Painted to mark Richmond’s admiration for Hunt, it may be compared with the sitter’s self-portrait now in the Uffizi (see ‘All known portraits, Self-portraits, 1867–75’), which was completed in 1875 and presumably seen by Richmond. In the year of the present portrait, Hunt stood godfather to Richmond’s son Arthur and Richmond publicly supported Hunt’s campaign for a repeal of the ban on marriage to a wife’s sister. The portrait was first shown at the Grosvenor Gallery when Hunt himself exhibited a portrait of his elder son Cyril and, as the fragmentary labels suggest, subsequently featured in the retrospective Hunt exhibition in London, Manchester, Liverpool and Glasgow in 1906–7.

According to the sitter’s daughter, Richmond ‘always said’ that this was ‘the best male portrait he had ever done’, and was retained by him. She also recorded ‘a kind of friendly compact’ between the painters that both should bequeath their portraits of Hunt by Richmond to the National Portrait Gallery – as Richmond did. [7]

According to the Register of applications to copy portraits, NPG 77/5, 'H. Allan' made an untraced copy of NPG 1901 between 17 January and 8 March 1935. It seems likely that the artist was Harry M. Allen, whose copy of Millais' portrait of Henry Irving is NPG 1453.

With the artist, by whom bequeathed 1921.