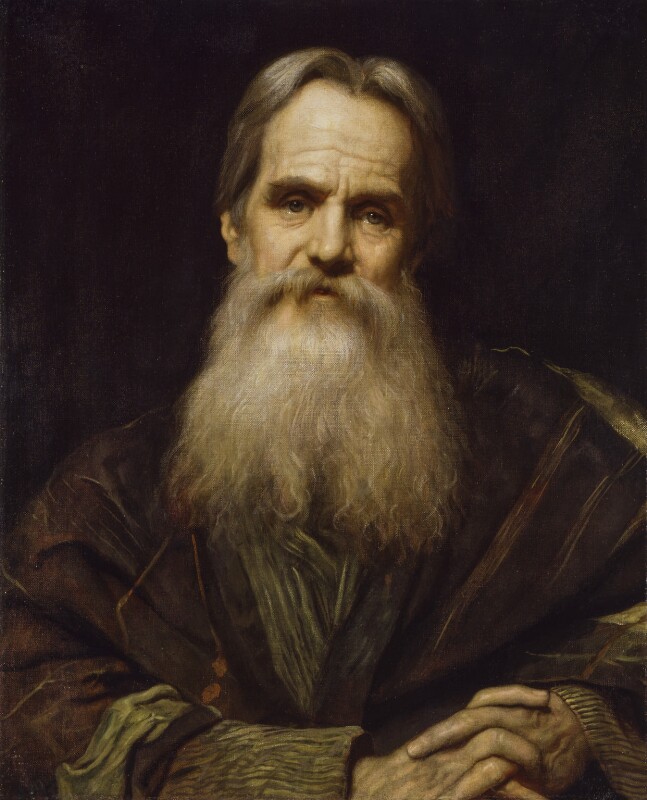 This is the second of two oil portraits of Hunt by William Blake Richmond (see NPG 1901 for the earlier work). On 2 April 1897 the sitter had celebrated his seventieth birthday at a dinner party attended by several old friends, including Richmond, Edward Burne-Jones and Arthur Hughes, and it may be that the idea of a commemorative portrait was first suggested then or soon after. Three years later a large group of admirers commissioned this portrait, marking the occasion with the following address:

To Mr Holman Hunt, – For 50 years lovers of English art have been deeply interested in your work. The part which you took long ago in one of the greatest movements [1] which ever affected the artists of this country is not, and cannot be, forgotten. Since that time you have laboured in the service of your art with unremitting energy and fidelity to your ideal, encountering and overcoming difficulties and prejudices and manifesting in your life a noble simplicity of character and a warmth of heart which endeared you to many, and a quiet enthusiasm which years have not abated. Never aiming at success by means unworthy of yourself, original and independent, you have been enabled to do justice to your great powers, and your work will, we believe, be treasured by future generations of your countrymen. Most of your old comrades have left us before the century, of which you have been an ornament, has closed. In their names, and in our own, we desire to express respect and affection and every good wish for your future.
We propose, if you will kindly consent, to present you with a portrait of yourself, to be painted by your friend Sir W.B. Richmond. [2]

The portrait was duly completed and presented to the sitter on 3 November 1900. By this date, Hunt was afflicted with severe glaucoma that had effectively ended his artistic career. ‘So unworldly and strange Holman Hunt did look,’ commented Burne-Jones in 1897. ‘Such a queer far off oaten colour he was all over him – his face, his flesh and his hair and everything…’ [4]

In 1906 Richmond contributed a prefatory note to Hunt’s retrospective exhibition at the Leicester Galleries, in which he wrote, ‘wholly his own, Holman Hunt’s Art is unlike that of any other painter. His strength of character shewn[sic] early and justified makes everything that comes from his hand interesting.’ [5] Around this time, artist and sitter agreed to a ‘friendly compact’ to leave both portraits to the National Portrait Gallery. Hunt’s will states, ‘I bequeath to the Trustees of the National Portrait Gallery London after the death of the said Marion Edith Holman Hunt the Portrait of me in oils by Sir William Blake Richmond KCB.’[6] On Hunt’s death, Richmond wrote, ‘My dear old friend worked truly, constantly too, for his ideal, which, liked or not, was never ignoble, never impure or sordid. Take his work all in all it is sincere, and some of it is quite splendid.’ [7]

In the opinion of Alfred Gissing, the portrait represents ‘the very type and ideal of magnificent old age; and in looking upon that thoughtful face one cannot help but feel that here sits a man in whom indeed is no guile, whom the ignoble has never soiled, and who is facing life to the very end with that passion for truth which has been his constant guide through all the varying degrees of fortune and misfortune incidental to a long and active career.’[8] According to Simon Reynolds, this was ‘Richmond’s masterpiece for 1900’, depicting ‘a wise and gentle old man with a biblical beard. It was considered by the donors to be a magnificent likeness.’ [9]

At some date, probably before its acquisition, the canvas was backed with a plywood panel.

Presented to the sitter by subscription; and bequeathed by him after the death of his widow Edith (1931) when offered to NPG by sitter’s daughter (Gladys Joseph) and son; offered again 1936, when accepted.