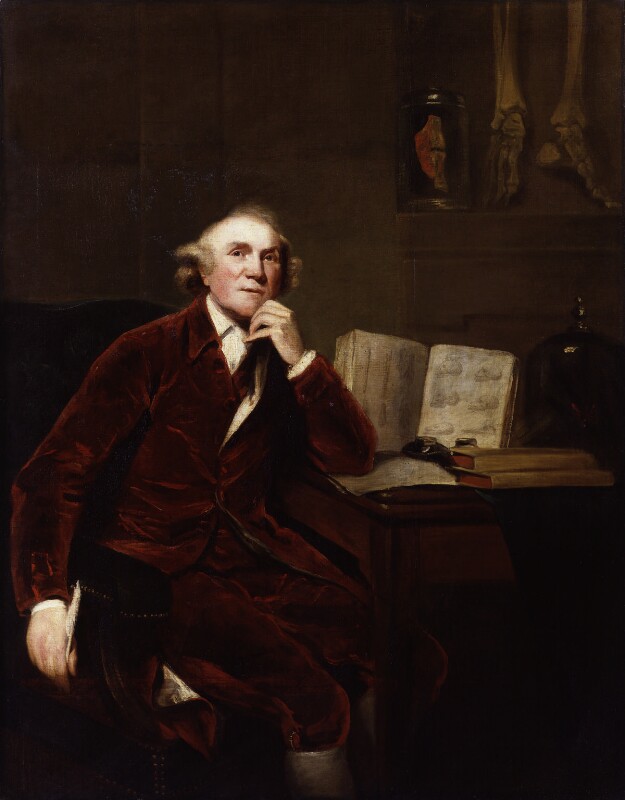 Copied from the portrait by Reynolds belonging to the Royal College of Surgeons, London, [1] which was exhibited RA 1786 (223) and engraved by William Sharp in 1788; [2] in 1865 Taylor observed that it was then ‘so irretrievably ruined by darkening and cracking, that the knowledge of what it had been seemed likely to be preserved to us by [NPG 77]’. [3] According to Hunter’s early biographer Everard Home, [4] friends had long wished to have an engraving of him, but he was reluctant to pay for a portrait; it was only to oblige his (and his wife’s) friend the engraver William Sharp, that sittings took place [5] in 1786; it was said that after some difficulty with the pose, Hunter ‘fatigued, fell into a train of thought ... absorbed in his own reflections’, which Reynolds promptly seized. [6] He sat again to Reynolds in 1789, when the head was slightly modified, [7] as is demonstrated by close comparison of the portrait with the Sharp engraving of 1788 - a curious episode; few would agree to have their portraits altered to reflect the effects of illness. [8] Sharp’s print was particularly admired; J. T. Smith said he had ‘immortalised himself’ by it, and Hunter took fifty copies. [9]
John Jackson was well-regarded as a copyist. Charles Bell, for whom NPG 77 was made, wrote to his brother on 6 October 1813: [10]

'I have got a beautiful copy of Sir Joshua Reynolds’ finest portrait – John Hunter, namely. It is admitted to be nearly as fine as the admired original. There is a man, Jackson, who has a wonderful talent for copying Old Masters. He charges more for a copy than Raeburn does for painting a portrait.'
C. R. Leslie recalled that in the autumn of 1813 he and Jackson were both engaged in copying Reynolds’s portrait of John Hunter, then on public exhibition at the British Institution, and later, when he saw Jackson’s copy in Sir Charles Bell’s house, ‘had I not been told what it was, I might have mistaken it for the original’. [11] Jackson also made a half-length drawing from the Reynolds portrait which was engraved by R. Cooper in 1814. [12]
Other copies of the Reynolds portrait are: at Oriel College, Oxford; [13] by H. W. Pickersgill c.1850 (three-quarters) in St Bartholomew’s Hospital, London (with an anonymous kit-cat copy); St George’s Hospital, Tooting; a bust-length enamel miniature by Henry Bone 1798, [14] a variant by H. M. Allen (half length with a wispy beard), [15] and a (damaged and reduced) copy by Muller 1854, are with the Royal College of Surgeons, London; a version without the open book, and the ‘prime’ version of the bearded half length, are in the Apothecaries Hall, London, and two nineteenth-century copies (one by Stewart Watson) belong to the Royal College of Surgeons, Edinburgh. [16]

Grey eyes, white hair, wearing a red velvet suit with a white lining, and white stockings; he sits in a green chair; a preparation of the lungs under a bell glass; the open book shows on the left-hand page a series of forelimbs, from the simplest foot to the human hand, and on the right a series of skulls from the human to the least developed; the paper beneath his elbow shows radiating lines; the two closed books are not titled [but in the original portrait they are Natural History of Fossils and Natural History of Vegetables1]; on a ledge beneath the jar an example of a spliced spine by an ossified prop; on the wall the feet of the skeleton of the Irish giant Charles Byrne.2

1 These appear indicative rather than specific titles.
2 He was drawn by Thomas Rowlandson (Royal Society of Surgeons, London; illus. W. LeFanu, A Catalogue of the Portraits and other paintings drawings and sculpture in the Royal College of Surgeons of England, 1960, pl.52), the drawing engraved (M. D. George, British Museum, Catalogue of Political and Personal Satires, VI, 6856).

Sir Charles Bell, professor of surgery at the University of Edinburgh;1 his widow, Marian, Lady Bell, from whom purchased 1859.

1 A label formerly verso reads: This Portrait of John Hunter was copied by John Jackson R.A. from the original by Sir Joshua Reynolds in the possession of the Royal College of Surgeons, London, in the year 1816, for Sir Charles Bell: and it was in his possession till his death April 29th 1842.