3 of 122 portraits of Sir Henry Irving 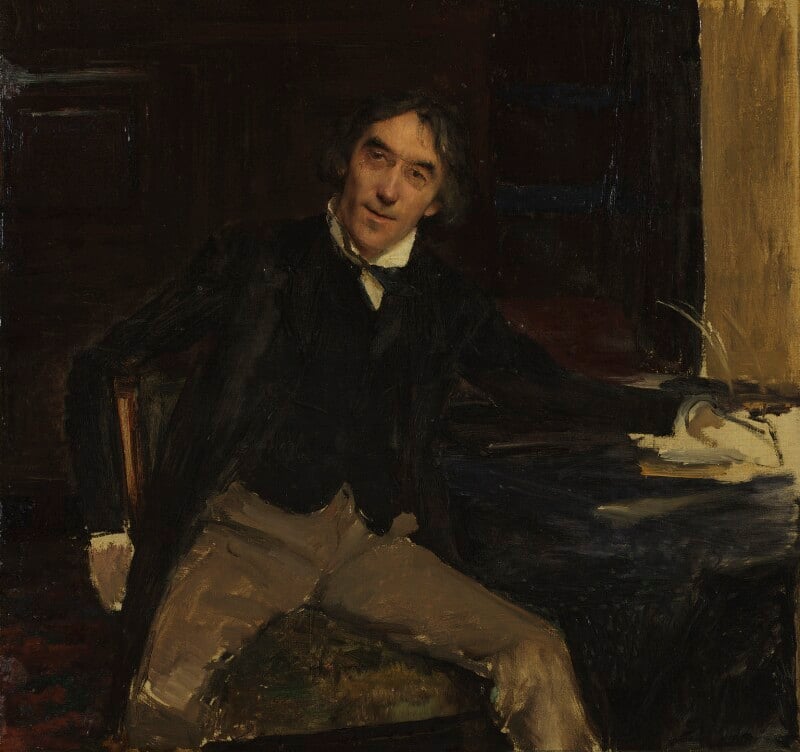 Irving is shown in private dress in a relaxed pose, right arm hooked over the back of a chair, left arm resting on the desk, his head cocked in interrogation, a faint smile ‘flickering over the deceiving gentleness of a determined mouth’. [1] The figure is compressed into an unusual, almost square format. While the face is painted with extreme refinement the hands and body are just sketched in, revealing the light ground and fine weave of the linen canvas.

This portrait, NPG 1560, presents a paradox: it promises a sensitive and telling likeness yet Irving reportedly disliked it, curtailing the sittings so that the painting remained in an unfinished state except for the head. Walford Graham Robertson, wrote:

The admirable little study by Bastian Lepage [sic], far and away the best portrait ever painted of Irving, very nearly shared the fate of the Sargent head [destruction by Irving] and would certainly have been wiped out of existence had not Ellen Terry, recognising its great value, managed to carry it off; presenting it in after-years to the National Portrait Gallery. It was possible to understand the actor’s objection to it, for, though it is a splendid piece of work and an almost photographic likeness, it represents Irving ‘intime’, Irving as Nature made him, with little hint of the superstructure of dignity and beauty to the raising of which he had devoted his life. It showed a side which he had never given to the public and he saw no reason why it should be thus perpetuated by Bastien Lepage. [2]

According to Ellen Terry, the idea for the portrait had taken shape over a Beefsteak Room supper:

I remember one supper very well at which Bastien-Lepage was present, and ‘Miss Sarah’ too. The artist was lost in admiration of Henry’s face, and expressed a strong desire to paint him. The Bastien-Lepage portrait originated that evening, and is certainly a Beefsteak Room portrait, [3] although Henry gave two sittings for it afterwards at Grafton Street. At the supper itself Bastien-Lepage drew on a half sheet of paper for me two little sketches, one of Sarah Bernhardt and the other of Henry, which are among my most precious relics. [4]

Although the painting is undated, and accounts of the sittings do not all tally, sources generally agree that it was painted in 1880. [5] In spring 1880 Jules Bastien-Lepage was spending a second season in London, working, exhibiting and enjoying some critical success. [6] His portrait of the Prince of Wales was on view at the Royal Academy; [7] and, simultaneously, his great portrait of Sarah Bernhardt (which had earned him the Légion d’honneur) and eight further works were being exhibited at the Grosvenor Gallery. [8] Meanwhile Irving, in his forties, was reaping praise for his Lyceum productions as well as for electrifying performances as an actor. His Merchant of Venice had opened in November 1879 and ran for seven months, representing ‘a record without precedent in the annals of the stage’. [9] In April 1880 Lawrence Alma-Tadema wrote to ask Irving for tickets for the Merchant of Venice on the French artist’s behalf: he was longing to see Irving’s Shylock but had only 23 April free as he had to return to Paris for the Salon. [10] See also an undated letter from Bastien-Lepage to Bram Stoker (Irving’s business manager), referring to the portrait; [11] and another from Bastien-Lepage to Irving himself, asking for a firm appointment, as he could not remain in London indefinitely and must finish the portrait. [12]

One or more sittings took place in Irving’s dark and cluttered study at 15A Grafton Street, as evoked by the panelled background and quill pens. [13] In 1908 Terry recalled two sittings; yet her daughter Edith Craig thought there had been just one: ‘The portrait was given to my mother by Sir Henry. It was painted in one evening after supper at his rooms 15A Grafton Street & I always understood the sitting went on until 3 o’clock in the morning.’ [14] Irving did not speak French and the artist never learnt English; an actor’s exhaustion; the prospect of more sittings – Bastien-Lepage had required 45 for the portrait of Sarah Bernhardt; and last but not least, the portrait’s promise of an image of unexpected intimacy; these are just some reasons why the project may have been abandoned. The artist himself blamed Irving’s busy life, writing to his friend Charles Baude in France: ‘Le portrait d’Irving n’a pas encore eu de nouvelles séances, Irving étant très occupé maintenant.’ [15]

Terry’s statement that ‘it was certainly a Beefsteak Room portrait’ suggests that the painting had hung for a while in the Lyceum’s supper room. Later on, apparently wishing it out of the public eye, Irving gave it to her. According to Terry’s son Edward Gordon Craig, ‘This year [1880] Jules Bastien-Lepage painted the portrait of Irving which is now in the National Portrait Gallery. This portrait hung on the walls of my mother’s house in Chelsea for many years. H.I. must have given it to her: he did not much care for it. He preferred Millais’ portrait, which I believe is now in the Garrick Club.’ [16]

In 1909 Ellen Terry offered the oils as a gift to the National Portrait Gallery. Although it was the second portrait of Irving to enter the collection (the first was Harry Milward Allen’s copy after Millais, acquired 1907, NPG 1453), the director Charles Holmes regarded the acquisition as a great coup. He recorded a telling incident in his memoirs: ‘Just before Christmas [1909] the Gallery received a notable gift from Ellen Terry: – her portrait of Henry Irving by Bastien-Lepage. She asked to be allowed to retain the fragment of a letter pasted upon the back. It read: “I’m expecting Bastien-Lepage every moment. I’d cut up the nasty thing, but think you like it”.’ [17]

Until it was gifted the painting was little known. A label on the back of the Whistler frame suggests it may have been exhibited in Dusseldorf in 1904; [18] and in 1909 it was exhibited at the Society of Portrait Painters, at the New Gallery in London. [19] On promise of the work Holmes asked Emery Walker to photograph it, [20] and a full-page plate appeared in the Burlington Magazine, in June 1910, to celebrate the acquisition. [21] A faithful copy of the portrait surfaced in the salerooms in 1951 and 1953 and is presently in a private collection. [22]

1) ‘[…] the smile which had been the inspiration and the despair of Sargent. It was a masterly portrait which Irving liked little better than Sargent’s. A man likes to see himself as he hopes he appears to others; in this respect Irving infinitely preferred Millais’s portrait to either of them.’ Irving 1951, p.511.
2) Robertson 1931, p.242.
3) Terry 1908, p.344. In summer 1879 Irving had the old Beefsteak Society rooms in the Lyceum restored into a supper room and named the Beefsteak Room. ‘The walls were hung with the collection of pictures which Irving had begun to acquire […] among them Whistler’s portrait of Irving as Philip …’; Irving 1951, p.367.
4) A Bastien-Lepage sketch of Irving framed jointly with one of Bernhardt is at Smallhythe Place, NT, 1117182.1. These are surely the sketches referred to by Terry but are signed and inscr. by the artist ‘Si le portrait de Maître Irving / n’est pas mieux dessiné c’est que / j’avais un “peu mal à la tête”!’ / Toute mon admiration pour Madame Terry / et mes regrets de n’avoir pu la rencontrer / J. Bastien-Lepage’.
5) Letter from E. Terry to C. Holmes, 31 Jan. 1910: ‘The portrait was painted in the year 1880 – in London’; cited Aubrun 1985, p.171, cat. no.241; see also Irving 1951, p.511. Stoker recollected what may have been his earliest encounter with Bastien-Lepage at a Beefsteak Room supper on 3 July 1880; Stoker 1906, vol.2, p.163.
6) George Clausen on Bastien-Lepage [in Theuriet 1892, p.118]: ‘For it is in his portraits that the great capacity of the man is best seen; and they are altogether admirable. His people stand before you, and you feel that they must be true to the very life […] There is no forcing of effect, no slurring of detail – everything is searched out relentlessly, lovingly. There is the same impartial standpoint – the same apparent determination to keep himself out of the picture.’
7) King Edward VII when Prince of Wales, 1879, Royal Coll., RCIN 402327. See letter from J. Bastien-Lepage to C. Baude (‘il pose mal … Je ne parle pas l’anglais du tout’), cited Aubrun 1985, p.162.
8) Sarah Bernhardt, 1879, priv. coll.
9) Irving 1951, p.356.
10) Letter from L. Alma-Tadema to H. Irving, 22 Apr. 1880, content summary, Henry Irving Correspondence, Ref. No.5089 (LDS, BC MS 19c Stoker).
11) Letter from J. Bastien-Lepage to B. Stoker, undated, content summary, Henry Irving Correspondence, Ref. No.7614 (LDS, BC MS 19c Stoker).
12) Letter from J. Bastien-Lepage to H. Irving, undated, content summary, Henry Irving Correspondence, Ref. No.7615 (LDS, BC MS 19c Stoker).
13) Irving’s Grafton St study ‘was in perpetual twilight, for the fleeting sunlight was filtered through curtained windows of stained and leaded glass. Though the dining-room and drawing-room […] were brighter and conventionally furnished, the place was evidently the haunt of a nocturnal creature whose daylight hours were passed in rest and seclusion.’ Irving 1951, p.321.
14) Letter from E. Craig to John Steegman, 22 June 1939, NPG RP 1560.
15) Letter from J. Bastien-Lepage to C. Baude, undated, Bibliothèque nationale, Paris, B.N.Est. Rés. in 8°, f° 48, cited Aubrun 1985, pp.15, 171.
16) Craig 1957, p.48.
17) Holmes 1936, p.271. See letter from J.W. Mackail to C. Holmes, 28 Dec. 1909, NPG RP 1560: ‘there is a scrap of paper on the back of the picture with some writing on it which Miss Terry wants to have back. Will you kindly see to this, & send it to her’.
18) However, the Internationale Kunstausstellung, Düsseldorf 1904 was an exhibition of old master paintings and sculpture.
19) SPP 19th Annual Exhibition, 1909, New G., London (124), in section ‘Portraits of Members of the musical and Dramatic Professions’.
20) For an original copy of Emery Walker’s photograph, see NPG SB (Irving). See also a Nicolas Sarony & Co. cigarette card loosely based on NPG 1560 (half-length detail), with Irving’s signature on a scroll; George Arents Collection, New York PL, 1204076.
21) C.J. Holmes, ‘Bastien Lepage’s Portrait of Sir Henry Irving’, Burlington Magazine, vol.17, June 1910, p.178: ‘The little picture now presented by Mrs. Carew not only has the advantage of being painted from life, but of being painted at the very summit of his brief career, by an artist no less distinguished in France than Millais was in England. The famous full length by Whistler is the only Irving portrait which could possibly be brought into comparison with it, but to a London gallery, where every inch of space is badly needed, and where the light is uncertain, the modest scale of the Bastien Lepage and its livelier tonality are distinct advantages.’
22) Sotheby’s, 24 Jan. 1951 (40); and Christie’s, 12 June 1953 (145). See also NPG NoS (Henry Irving).

Sir Henry Irving; given to Dame Ellen Alice Terry; by whom given to the NPG, 1910.