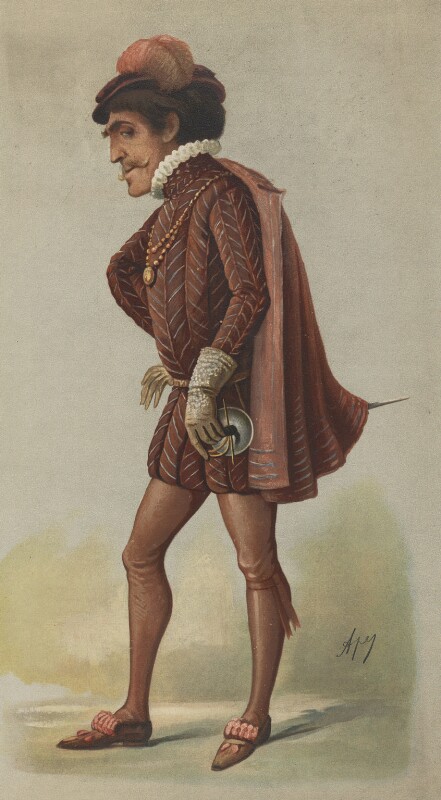 Henry Irving is shown in his role as Benedick, prickly lover of Beatrice, in Shakespeare’s comedy Much Ado About Nothing. [1] The production opened at the Lyceum Theatre in October 1882 and ran until the following July, for a record 212 performances. Ellen Terry as Beatrice was deemed by the British public a matchless piece of casting (‘the very Beatrice that Shakespeare drew’). [2] For Irving the critique, very positive, was also directed at his qualities as manager and producer. The Athenaeum declared ‘Much Ado about Nothing must be pronounced the most successful of Irving’s Shakespeare revivals – no actor […] can claim to have so thoroughly entered into the character or charged it with equal vitality.’ [3] The Academy wrote: ‘Mr Irving was made for Benedick and Benedick for Mr. Irving […] the element of satire in the part – the conception of the robust humanity boasting its own strength and swayed even while it boasts by the lightest of feminine charms – is much in his own humour. The chivalry of the character suits him […] and its quiet self-analytical wit.’ [4] As Benedick ‘he gave faultless expression to the sub-acid humour of the part’, recalled Charles Hiatt in 1899. [5] Irving had selected the Shakespearean classic to prepare for the Lyceum Company’s first American tour, where it would serve as a foil to the dark drama of The Bells. Such good reviews usefully paved his way.

Noblesse oblige: so, with fame, Irving became known for ‘princely’ generosity. In the 1880s Carlo Pellegrini (‘Ape’), of Vanity Fair fame and a regular of Beefsteak Room suppers, was struggling with health and financial problems. He had designed the familiar image of Irving as Mathias in The Bells (see ‘All known portraits, II. In stage character, The Bells, publ. 1874’). Now, in urgent need of money in May 1883, he turned to Irving for a £300 loan, and in typical fashion this was promptly granted (equally typically the debt was still outstanding in January 1887). [6]

NPG 5073 is a large and striking lithograph after a lost drawing by Pellegrini. It was possibly designed at the time of the loan, while Much Ado About Nothing was still enjoying its long run at the Lyceum. In his note of thanks for the money, Pellegrini added a line asking Irving to ‘kindly write a few words about Benedick as the printer needs them soon to put in the press’. [7] It is suggested here that the ‘few words about Benedick’ might relate to letterpress for a publication scheme, unconnected with Vanity Fair and never realized, of a set of display prints, for which Pellegrini’s caricature of the actor Sir Squire Bancroft as Captain Hawtree (NPG 5072) would have been another subject. Bancroft recalled in his memoirs (but putting no date on the recollection) that ‘Pellegrini drew some special and rather elaborate caricatures of Irving as Benedick and of myself as Captain Hawtree. No “sittings” were ever given for his work, his notes for them being taken generally when the subject did not know it, and the sketches made from memory.’ [8] In a separate exercise and at an unknown date, Pellegrini produced a non-caricature etching of Henry Irving, bust-length in private dress (see ‘All known portraits, I. In private character, Paintings, drawings, sculptures and prints, Undated’), and a similar etched bust of Bancroft.

There are other copies of this print at the Victoria & Albert Museum, the Museum of London and the Garrick Club in London, and at the Theatre Collection of the Harvard College Library, Cambridge, MA. [9]

The history of NPG 5073 is not known before 1976, when it was discovered with four other caricatures in storage in the National Portrait Gallery Registrar’s office. It was soon after accessioned, and entered the main Collection listed as a drawing. [10]