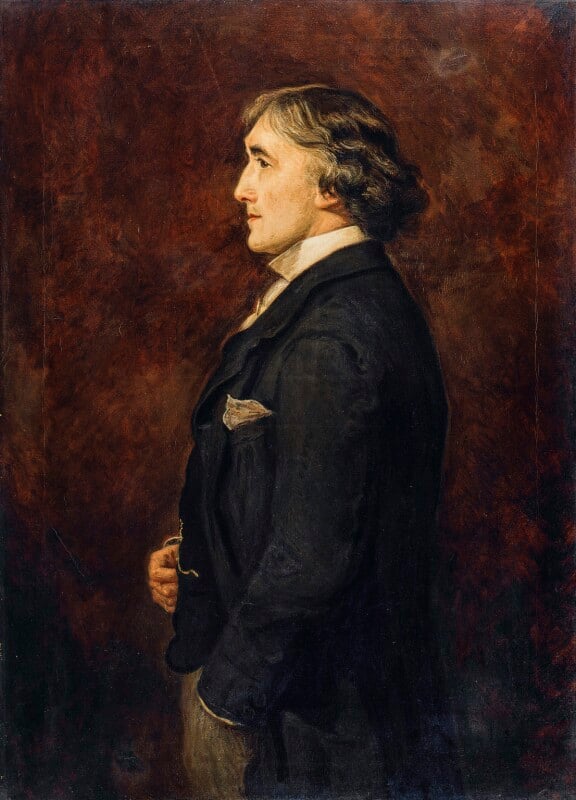 NPG 1453 is a faithful replica of a painting of Irving by John Everett Millais, which has always hung in the Garrick Club, London. The copyist was Harry Milward Allen, now little known but active in the first quarter of the twentieth century. The story of how this replica came to be accepted by the National Portrait Gallery Trustees, and its fate after 1910, sheds a curious light on Gallery acquisition policy of the time.

Irving liked his portrait by Millais. [1] It is clear from the correspondence that the artist made the first advances, in July 1883, and that sittings were few and rushed. [2] Not everybody shared Irving’s satisfaction with the outcome, however, and some questioned its value as a likeness; for instance, his biographer Percy Fitzgerald thought it ‘rather sketchily painted, and lack[ing] force and expression’;[3] and Harry Furniss, who had spent decades studying the actor’s face and movements, made the same point: ‘Millais’ portrait […] gives one no idea of strength, and Irving had a strong face. And as he frequently sat under this portrait it was easy to contrast the original with the picture.’ [4] Ellen Terry thought Irving’s views on his portraiture quite misguided: ‘Henry had a strange affection for the wrong pictures of himself. He disliked the Bastien Lepage, the Whistler, and the Sargent, which never even saw the light. He adored the weak, handsome picture by Millais….’ [5]

After Irving died in October 1905 memorials were organized. Seeing there was no major portrait in a public collection, and as owners of an oils Irving had ‘adored’ (and which had become famous through reproduction), [6] a group of Garrick Club members decided to present a replica of their Millais portrait to the NPG. The experienced copyist Allen was given the ‘difficult task’; and as the original was ‘fixed in its frame in the Strangers’ Dining Room’ he may have worked at the Club. [7]

As a copyist and occasional portrait painter, Harry Allen is very well documented at the NPG. His name first appears in the Gallery’s Register of applications to copy, NPG 77/5, when he spent two years from 1902 copying the famous portrait of Charles Dickens by Daniel Maclise (NPG 1172). [8] He registered at the Gallery again at various dates between 1909 and 1912; and for a last time in 1926. [9] In the registers he signed variously ‘H. Allen’; ‘Harry Allen’; ‘H.M. Allen’; ‘Harry M. Allen’; and ‘Harry Milward Allen’, with addresses in Putney.

Correspondence between the Garrick Club and the Gallery regarding the copy began in January 1907, once the painting was finished, when the club secretary Charles Fitch offered to put copy and original ‘near each other’ for inspection. [10] Allen’s painting was accepted by the NPG Trustees in February. The World reported it had been an unusual transaction, with some bending of the rules by both institutions:

[The Garrick] committee, as guardians of the interests of its members, very properly refuse to allow any of its wonderful collection of art treasures to be reproduced. They made an exception in the case of this portrait of Sir Henry Irving, on the distinct proviso that the copy should be offered to the trustees of the National Portrait Gallery as a present to the nation by the Garrick Club. The [NPG] trustees, on their part, handsomely waived two of their standing orders, one that no portrait shall be accepted until the person it portrays shall have been dead ten years, and another that only originals, and not copies, shall be hung in the Gallery. [11]

Henry Irving was represented at the Gallery by NPG 1453 until February 1910, when Ellen Terry offered to present a portrait of the actor painted from life by Jules Bastien-Lepage (NPG 1560). For the director Charles Holmes, who considered the Allen painting had no ‘great intrinsic merit’ and was ‘valuable rather as filling a gap in the collection’, [12] this offer was exciting. But it had potential for causing offence, too: Bastien-Lepage’s portrait showed up the deficiencies of the Allen; they could not hang side by side, yet both were important gifts to the nation. Holmes needed to make discreet preliminary enquiries, as revealed in a letter from a friend (almost certainly Horace Hannyngton Child, assistant editor of the Burlington Magazine) in January 1910:

Dear C.J.
I learned on Friday at the Garrick that the proposal to present the N.P.G. with the Millais copy was but coldly received [by the Garrick committee in 1907?], & that practically the whole expense & trouble were borne by the man whose idea it was. And he is dead. The opinion I received was that the best thing to do was the simplest also – just offer it on loan where you please & say nothing about it – at any rate beyond a formal notification of the deed. They would be glad of the picture at Stratford in the Shakespeare memorial. All this of course in confidence.
How goes it with thee, o man of men? […]
Thine H.C. [13]

Accordingly Holmes lost no time in negotiating with the Shakespeare Memorial at Stratford. On 15 February 1910 Charles Fitch wrote that the Garrick committee ‘have no objection to your loaning the portrait of Sir Henry Irving to the Shakespeare memorial at Stratford-on-Avon as suggested’. [14] The picture was dispatched to Stratford in March 1910, and there it remained – fortunately unharmed by a fire in 1926 – until the 1960s, the one representation of Irving at Stratford. [15] Finally, prompted it seems by the threat of annual insurance fees, the Royal Shakespeare Company asked to terminate the loan agreement, and the painting was returned to the Gallery on 21 June 1967. [16]

Given by the Garrick Club, February 1907.