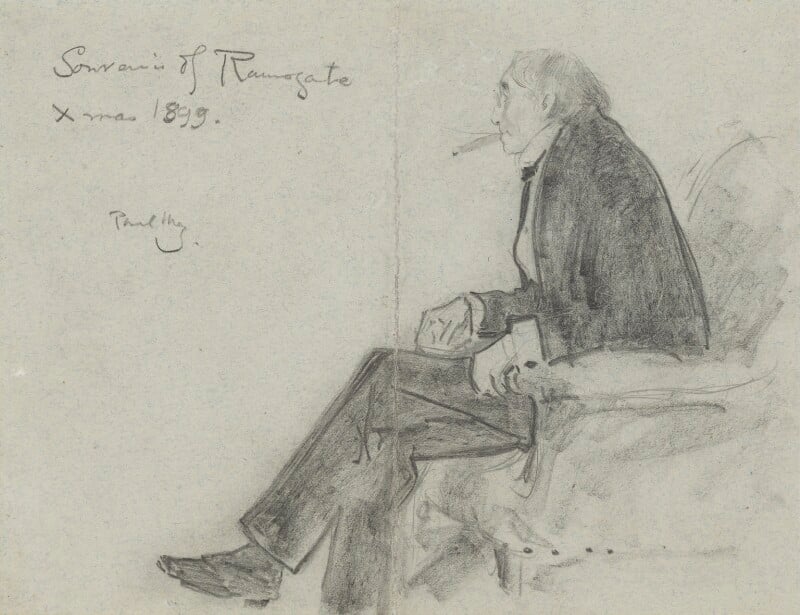 This informal image of Henry Irving is one of three studies by Phil May in the National Portrait Gallery Collection (NPG 3679–3681). A fourth, untraced, close to but less finished than NPG 3679, was given by May to the playwright Frank Burnand, his editor at Punch. Burnand reproduced it in his memoirs, with the undated caption: ‘A portrait of Sir Henry Irving drawn by Phil May in the course of an interesting evening at my house in Ramsgate. Phil was in a corner, silent, observant and industrious. Next morning he gave me this sketch.’ [1] This information allows the inscription ‘Ramsgate’ on NPG 3679 to be identified with Burnand’s house at 18 Royal Crescent, the scene of much hospitality: ‘in the 1890s Kent was practically Punch by the sea. The Mays […] were certainly guests of Burnand at Royal Crescent, Ramsgate.’ [2] After May’s election to the Punch team of cartoonists in 1895 editor and artist had become friends, even collaborating on a guidebook to Kent (1897). [3]

Another guest of Burnand’s on that ‘interesting evening’ in Ramsgate was his old friend Henry Irving. Their correspondence began in 1875 and only ended with the actor’s death in 1905. Burnand provided a platform for Irving’s productions in Punch, while Irving responded with generous invitations to supper and theatre seats; for instance, Burnand requested tickets to take Phil and Lilian May to the opening night of Robespierre in April 1899. [4] (According to his biographer, as a young man in Leeds in the late 1870s Phil May had been ‘completely stage-struck and used to strut about the house declaiming Shakespeare in the style of his idol, Henry Irving’.) [5]

While the Ramsgate location given in the drawing’s inscription can be explained, the year, if not a slip of the pencil, is puzzling, for in December 1899 Irving was in the middle of his sixth North American tour, performing at the New National Theatre, Washington, DC: clearly May did not draw him there. [6]

Irving looks somewhat frail in the drawings, and this is a clue. He had caught pleurisy on tour in October 1898 and had had to convalesce in Bournemouth, where he was installed at the Royal Bath Hotel by 20 December, and where he remained, ‘low in spirit’, for the whole of January 1899. In February, however, he was back in London preparing Robespierre; and on 8 February he invited himself down to Burnand’s at Ramsgate. [7] It is suggested that Phil May was Burnand’s guest, if not at this date then at some other time that winter when Irving was also in Ramsgate, and that the set of four drawings – which are in fact undated – was executed then.

Since Irving was in America at Christmas 1899 and not in Kent, the inscription must be later than the drawing itself. Perhaps May added it when he gave the drawings away, probably not to Burnand (who already owned one; see above) but maybe to Irving himself, posted to America as a Christmas gift, [8] or else to another Royal Crescent familiar.

May used at least two different pencils in the drawings: a hard one for detailing the heads and the figure outlines, and a softer one for shading the body and chair. He also used the hard pencil to sign the two smaller drawings (NPG 3680 and NPG 3681), and the signatures seem of a piece with the drawings. NPG 3679 is signed and inscribed in a softer pencil.

Miss Margaret S. Shields offered the sketches of Irving in memory of her father, the late Mr L. Shields, in September 1949. [9] The drawings, at that date displayed in a single frame, came with no history, though it is known that NPG 3679 at least had belonged to the Marylebone booksellers Francis Edwards Ltd in 1932. [10] The three drawings were thought a ‘most interesting addition to the collection’ and won unanimous approval from the Gallery Trustees at their meeting in October 1949. [11]