4 of 122 portraits of Sir Henry Irving 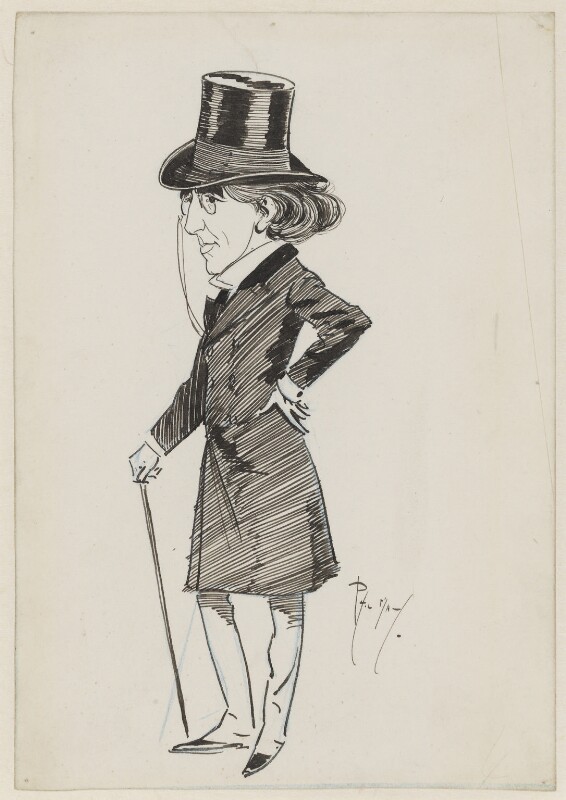 Henry Irving is shown in a close-fitting coat and top hat, and can be identified by his thick eyebrows, pince-nez and dark wavy hair. As a public figure he was easily recognized due to the extraordinary range of images of him in circulation. His grandson related: ‘Irving once tried to explain to a friend the reason for the interest and curiosity he excited wherever he went: “You see, there are a great many illustrated papers, and other people cut their hair.”’ [1]

NPG 1611 is a good example of a Phil May portrait chargé. There is no evidence it was published but similar neatly penned figures of Irving by May appeared in Society winter numbers in 1884 and 1885. [2] His approach was to draw personalities of the day with slightly enlarged heads, barely satirized. Punch historian Marion Harry Spielmann noted a lack of bite in the characterizations: ‘[May] cannot be called a caricaturist, for in his work there lacks that fierce quality of critical conception – above all, that subject-matter that makes one think, that sardonic appeal to head and heart at once, which make up the sum of true caricature.’ [3] A problem with any Irving portrait chargé is that it fails to convey his intrinsic lankiness.

If the head is meticulously outlined, the rest of the figure is just sketched in. Volume – here the hat and coat – is suggested by parallel shading along the surface planes, a device adopted from another illustrator, (Edward) Linley Sambourne: ‘at first he did not join lines as skilfully [as Sambourne] but he gradually simplifed this method, using a flatter and simpler tone throughout’, wrote another historian of Punch, R.G. Price. [4]

This undated drawing would not have been done from sittings but from general observation and a knowledge of Irving imagery; it was possibly made for stock. May had been a fan of Irving’s since the 1870s; and both men enjoyed Frank Burnand’s hospitality at Ramsgate, as well as Savage Club meetings in London. [5] There are numerous Phil May drawings of Irving, both in character and in private dress; see ‘All known portraits’. Although there is no evidence of letters between them in the Henry Irving Correspondence, an informal drawing, signed and dated 1899 (NPG 3679, indicates there was personal contact by then).

The dealers Ernest Brown & Phillips (Leicester Galleries) offered this drawing as a gift to the National Portrait Gallery in May 1911: ‘We are sending herewith 2 portraits (a) Sir Henry Irving by Phil May (b) Lord Salisbury by Phil May which we shall have much pleasure in presenting to the National Portrait Gallery if the trustees would like to have them.’ [6] The drawing came with no history, but it is worth noting that the Leicester Galleries organized three exhibitions of Phil May drawings between 1903 and 1912. [7]


View all known portraits for Philip William ('Phil') May