11 of 11 portraits matching these criteria: 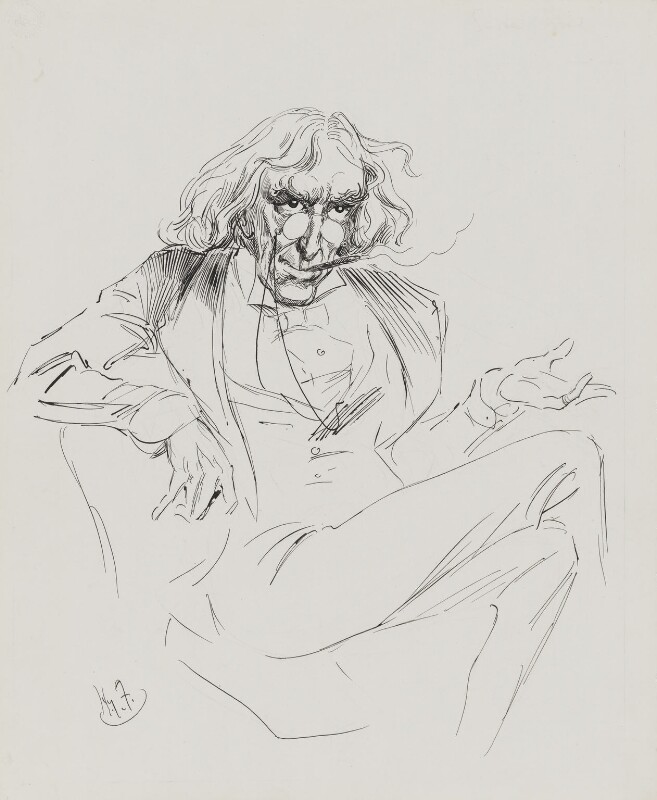 This brilliant depiction showing Henry Irving towards the end of his life is by Harry Furniss, who drew the actor on and off stage for over thirty years. Such a stream of satire did not spoil a relationship which, according to Furniss at least, was grounded in respect and artistic fellowship. Furniss’s writing on Irving was mainly flattering; and his sketches of him edgy but not cruel: he believed that artist and actor were useful to each other. In a 1906 memorial article on Irving he wrote: ‘although there is no denying the fact that he was very sensitive to caricature, he knew that I was a genuine admirer of his genius, and that in common with all artists I knew him to be a true artist also, and his poses and the management of his hands and drapery were well worth studying by the brethren of the pencil and the brush.’ [1] See the Henry Irving Correspondence for evidence of their exchanges during the 1890s. [2]

In this image, executed on prepared card for optimum definition,[3] Furniss has concentrated on the head, especially the deep-set eyes. There are some working corrections, especially to the lower lip which has been scratched out and redrawn; but the verve of his pen and years of observation allow Furniss to capture elements of Irving’s complex personality.