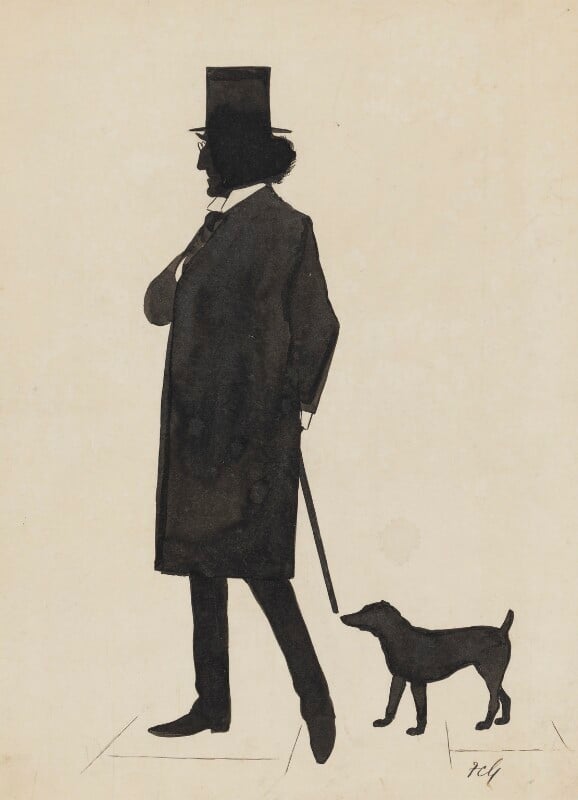 Francis Carruthers Gould (‘F.C.G.’) has picked out the specifics of Irving’s head – bristling eyebrows, pince-nez, the jutting jaw and bush of hair – to make this silhouette clearly recognizable. He depicts him as a man about town, a strolling figure in top hat and buttoned-up coat. The dog, most probably the terrier Fussie, is integral to the characterization. It is possible to ‘fill out’ the silhouette by comparing it to an 1890s photograph showing Irving in similar clothes with Fussie holding his cane (V&A, London, S.145:104-2007).

Gould’s early career was in stockbroking, and only in mid-life did he turn to professional illustration, specializing in political caricature. Silhouettes were just one of a range of means he used to capture his subjects, pleasingly as here, parodically, but rarely corrosively: ‘his approach was never savage […] his was essentially the cartoon of clubland’. [1] (For an ‘F.C.G.’ Irving silhouette with a little more bite see British Museum, London, 1955,0709.21). Since Gould was a political caricaturist, Henry Irving was not in his regular line of fire. But he drew him many times, ranging from an 1877 pen and ink sketch to an illustration for Harold Begbie’s The Struwwelpeter Alphabet (1900). [2] Gould’s work has been well represented at the National Portrait Gallery since the purchase of a collection of his caricatures in 1936; see NPG Portrait Set ‘Caricatures of politicians by Sir Francis Carruthers Gould, circa 1889–1912. His son Alexander (‘A.C.G.’) also included silhouettes of Irving in his caricature drawings. [3]

NPG 3538 is not a cut-paper silhouette but a large and carefully finished drawing. The pen and ink contours are filled in with black wash; and Gould uses the old trick of leaving the paper blank for the collar and cuffs. The drawing is apparently unpublished, and has been provisionally dated on the basis of the pencil inscription (Irving was knighted in 1895) and the year of Fussie’s death, 1897. It was part of a gift of three drawings offered to the NPG by the artist’s son, Norman Carruthers Gould, in October 1946. [4] The drawings were initially accepted for the Gallery’s reference portfolios, in 1946, and by 1949 had become incorporated into the main collection. [5]

Given by Norman Carruthers Gould, the artist's son, and accepted for the NPG Reference Collection in 1946.