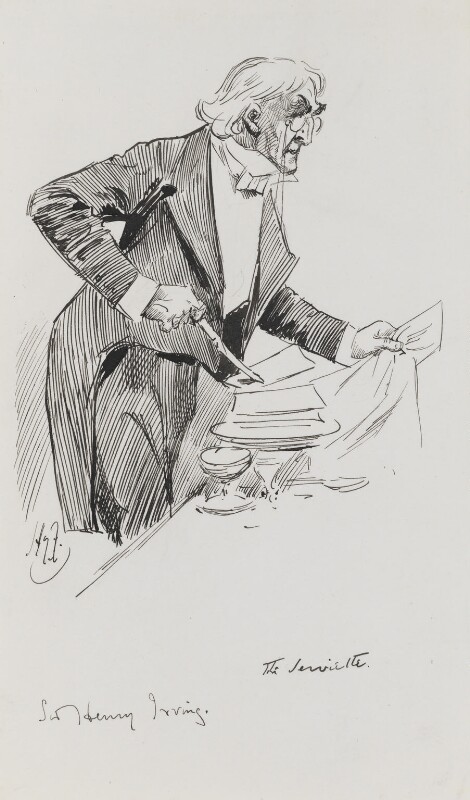 Henry Irving is dressed in formal white tie, apparently making a speech. Harry Furniss recalled listening to Irving on several such occasions: ‘Irving was a wretched speaker. His set speeches at banquets and other functions were written for him, and he read them from the printed slips so cleverly that only those seated near detected that the words were not spoken extempore.’ [1] This could be Furniss’s sketch of such an occasion, with Irving using the serviette to hide his stack of slips.

The actor proved an endlessly fascinating subject: ‘Perhaps no one in our time lent himself more to caricature than Irving.’ [2] There are 26 caricatures of him by Furniss at the National Portrait Gallery alone, divided between the Reference and Primary collections. Most of the earlier ones show him in character parts, but as Irving grew older Furniss drew him more often in private dress, from the angle of a fellow diner, as here. [3] The inscription ‘Sir Henry Irving’ suggests it was made after his knighthood in 1895.

Three-quarter-length to right, standing at a dinner table, holding table knife in right hand and a napkin in left hand.

The artist; his sons, from whom purchased (through Theodore Cluse), April 1947.