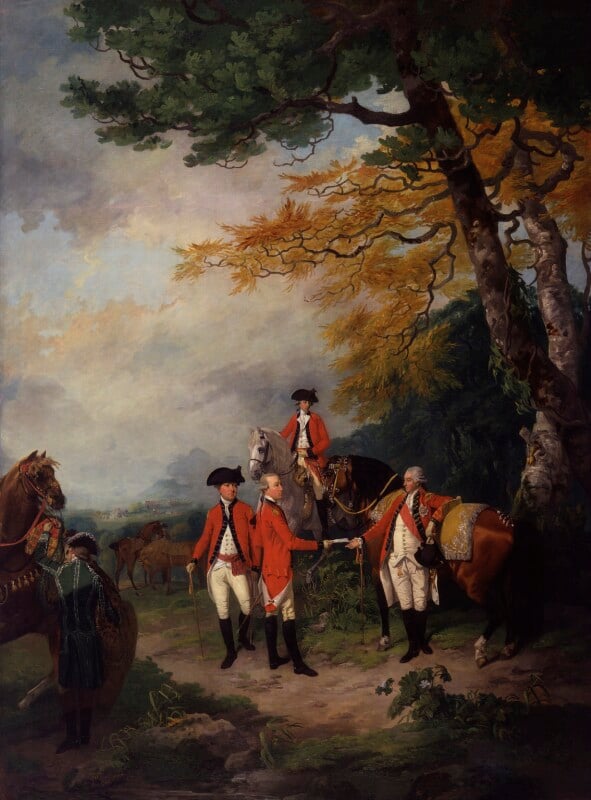 NPG 682 was painted in Dublin, where Wheatley resided in 1781 when Irwin commander-in-chief. No other portrait of Irwin is now known; he was made colonel of the 3rd regiment of horse in Ireland in 1780 (and, according to Wraxall, was given the sixth Dragoon Guards by the King). As commander in Ireland Irwin enjoyed ‘very ample appointments and advantages’; in 1781 he gave a banquet in Dublin for the Lord Lieutenant, Lord Carlisle, at which ‘he displayed on the table, as the principal piece in the dessert, a representation of the fortress of Gibraltar, invested by the Spanish forces, executed in confectionery ... together with the works, batteries, and artillery of the besiegers, which threw sugar plumbs against the walls’. [1]
NPG 682 had previously been variously identified. It was sold in 1877 as George III and staff at a Review; in 1882 it was offered to the NPG as The Encampment in Hyde Park during the Gordon Riots with portraits of Lord Amherst, Genl Conway, Alderman Turner, &c., [2] and in 1888 it was catalogued as a Military Group of Officers, believed to include Lord Amherst and Field Marshal Conway. In 1896 it was identified as a Review of Troops in the Phoenix Park, Dublin, by General Sir John Irwin, KB, [3] a title which now appears correct, although the identification of Phoenix Park is probable rather than topographical. More recently NPG 682 was very tentatively, but it seems mistakenly, associated with a painting exhibited by Wheatley at the Society of Artists in 1783 (320), the Review of the Irish Volunteers in the Phoenix Park, Dublin. [4]

1) The Historical and Posthumous Memoirs of Sir Nathanial Wraxall 1772-1784, III, pp 91-92. Irwin had himself been governor of Gibraltar 1766-68. See also NPG 1752.
2) As described by Henry Graves, letter to Scharf, 19 March 1883; NPG archive.
3) F. R. Falhirer, letter of 28 June 1896 (NPG archive), first suggested the subject was a review by General Sir John Irwin in Phoenix Park, Dublin; he emphasised that it had nothing to do with the Irish Volunteers who were disbanded in 1781 and not reviewed that year; Lord Carlisle, the lord-lieutenant, was not KB.
4) As recounted in M. Webster, Francis Wheatley, 1970, p.129. Wheatley’s Irish Volunteers at College Green 1779 (National Gallery of Ireland), illus. M. Webster, Francis Wheatley, 1970, fig.35, shows different uniforms.

On the left General Irwin’s horse attended by his (presumably liveried) servant wearing a black hat, green coat with silver-trim and brown boots, holding a saddle cloth bearing the motto and crest of the Bath. The foreground staff officers (who remain unidentified) have black hats, red coats with epaulettes and blue facings, white gloves, white breeches and black boots. The standing officer with the stick in his right hand wears a purple sash, as does the mounted officer behind him. On the right, Irwin stands against another’s horse (which bears a gold saddle cloth), receiving a dispatch; he wears the ribbon and badge of the Bath and the two embroideries round the cuff indicate his rank of lieutenant general.1