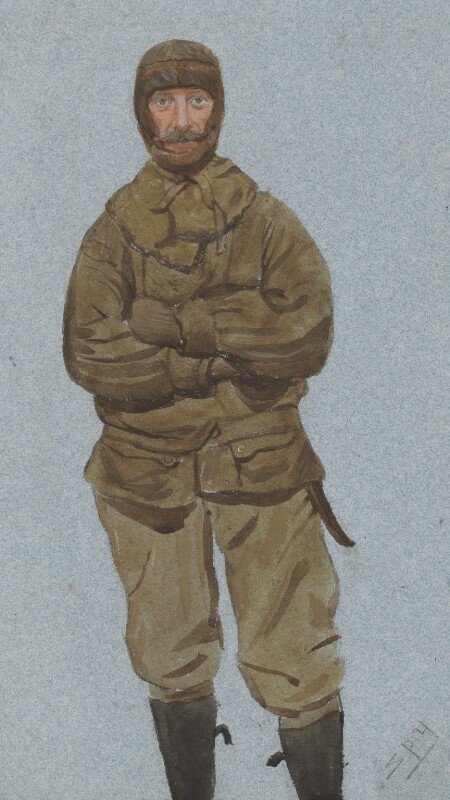 One of numerous celebrity caricatures for Vanity Fair by ‘Spy’ – the artist Leslie Ward – this watercolour shows Jackson as if standing amidst snow, clad in a weatherproof polar expedition outfit. This garb is somewhat surprising, as Jackson took pride in his full-length reindeer-skin clothing, as worn by people living in northern latitudes. Unlike many caricatures, this is a relatively straightforward likeness, without comic manipulation or exaggeration, but the effect of the all-enveloping clothing is to emphasize Jackson’s handle-bar moustache and staring eyes.

In 1894, Jackson embarked on the Arctic expedition funded by newspaper owner Alfred Harmsworth which made him briefly famous. At the time he was described as:

a man of great and abundant energy and activity. As an old traveller and an ardent sportsman in uncivilized regions he knows something of the shifts of camp life; as having twice travelled for a prolonged period in Arctic regions he is aware of the sort of work which lies before him; and as having contemplated this expedition for two or three years, he has made up his mind on many points which often harass other travellers up to the moment of departure. Accompanying him are able, active, vigorous young Englishmen.[1]

In September 1897, Jackson returned to Britain, having failed to reach the North Pole but having surveyed the western archipelago of Franz Josef Land and rendered assistance to the Norwegian explorer Fridtjof Nansen. On 19 November he lectured on the expedition in London, at a meeting presided over by the Prince of Wales, who thanked Jackson for his entertaining anecdotes and ‘the accounts of the daring way in which he first photographed [polar] bears and then shot them’.[2] A month later Jackson announced plans for another polar endeavour, but in the event undertook no more Arctic explorations, presumably owing to lack of sponsorship.

The drawing, which probably dates from November–December 1897, was designed for lithographic reproduction, with the rule across the foot representing the lower edge of the printed version. This has short pencil lines marking out 7 inches (180 millimetres), as indicated in the lower inscription; 12 inches (300 millimetres) is the length from the rule to the top of Jackson’s head. The upper inscription would seem to be a much later addition, when Jackson’s fame had faded and his middle name was incorrectly recalled.

When reproduced (by the lithographic firm Vincent Brooks, Day & Son) the caricature was no.DCXCVII in the Vanity Fair series ‘Men of the Day’ and entitled ‘Franz Josef Land’. The artist’s signature was moved to lower left. The accompanying text reads:

The newest of returned Arctic explorers was born seven-and-thirty years ago; and after undergoing a certain amount of education at Denstone College and Edinburgh University, his inclination was to vagabondage. So he travelled for a while in the Australian deserts, and journeyed across the Great Tundra in midwinter. He wrote a book called ‘The Great Frozen Land’; and like many other venturous and less lucky strivers after the unnecessary, he cast longing eyes towards the North Pole. He had the good fortune to find a ready and worthy patron of his ambition; and the Harmsworth-Jackson Expedition being fitted out with all the resources that money and foresight could command, he disappeared for the space of three years. He has now returned, and although he did not get within range of that elusive North Pole – nor, indeed, so near to it as Nansen did – yet he learned a great deal about Franz Josef Land, where he spent many months wandering on the face of ice, naming bays, capes and other articles of frozen geography; collecting geological, zoological and botanical specimens and making more or less useful astronomical observations and calculations. Then he met Nansen and being so well equipped was able to give that rival explorer an excellent dinner on the ice; after which he spent another year of better work than he had done during the two previous years. And now that he has returned to civilisation he looks as robust as if he had been no farther than Margate for a holiday.

He once covered forty-one and a-half miles of northern ice in twenty-four hours, which is a record performance; and whatever may be said of his failure to make the Pole there is no doubt that the Harmsworth-Jackson Expedition has been a scientific success; for it has resulted in a very fine collection of Arctic wares.

He is a man of temper who has shot big game. He is not beautiful; but he has fine eyes.[3]