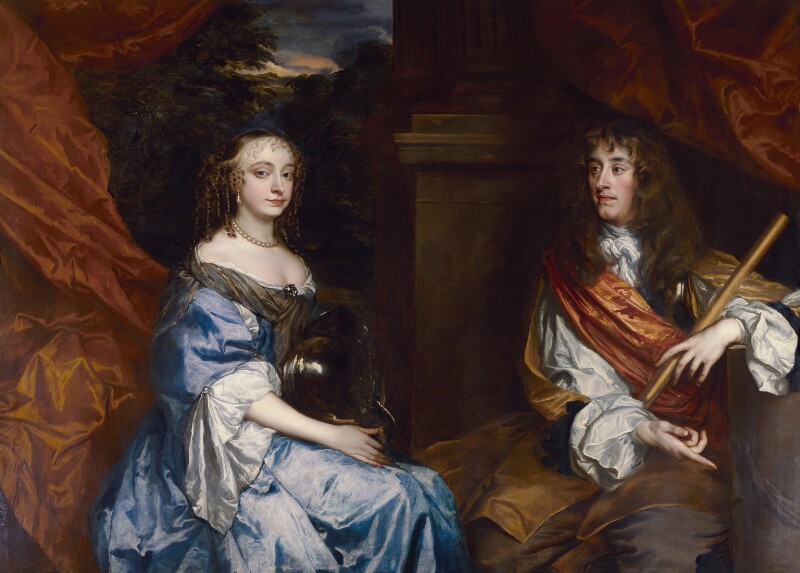 James had met Anne Hyde, daughter of the Earl of Clarendon, in Bruges in 1656 when she was Maid of Honour to the Princess of Orange (the Duke’s sister). They married in London in some secrecy on 3 September 1660; a still-born son was born on 22 October and the marriage was made public in December.
James is shown carrying the baton of a field officer, and his high-topped boots suggest his recent service as a cavalryman in France and Flanders. [1] The composition derives from the separate portraits of the Duke of York and his Duchess, formerly in the Clarendon collection, and now in the Scottish NPG (PG 901, PG 1179), probably painted soon after the sitters’ marriage. [2] The Edinburgh picture shows the Duke pointing to the left with his left hand and his field officer’s staff in his right.
Millar has described NPG 5077 as a replica of a composition the finest version of which is at Petworth; [3] there are copies at Euston [4] and formerly at Clumber Park (sold Christie’s, 31 March 1939, lot 30). Two versions were listed at Cannons in 1725. [5] A drawing from the figure of James ascribed to Caspar Netscher is in the National Gallery of Ireland (2201).

[‘… probably presented by the sitters to Richard Talbot, Duke of Tyrconnel’, according to Christie’s] by descent to Hon. Rose Talbot, Malahide Castle; sold Christie’s, Dublin, 26 March 1976, lot 43, bought Leggatt for the NPG.

View all known portraits for Anne Hyde, Duchess of York