40 of 3330 portraits matching these criteria: 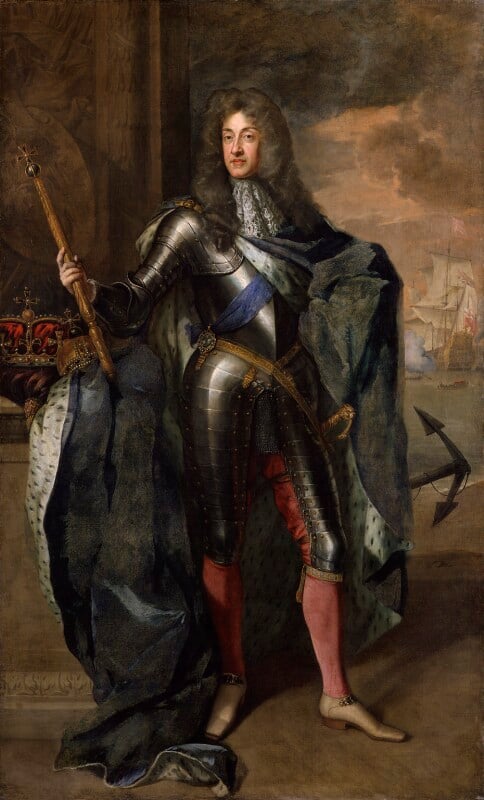 There can be little doubt that this impressive and vigorous painting began as a portrait of James as Lord High Admiral. Beckett’s engraving shows in place of the regalia the baton and helmet of a Lord High Admiral, an office James had filled since May 1684 in all but name (following his enforced resignation in 1673 on declaring himself Catholic). The regalia in NPG 666 are hurriedly painted (although neither close inspection nor x-radiography proves that the portrait had first agreed with Beckett’s engraving). Stewart equated NPG 666 with the portrait ordered in October 1683 for the Scottish Privy Council Chamber, paid for in October 1684 and received by December [1] (indicating the regalia were certainly added). Kneller dated the portrait 1684; James came to the throne in February 1685.
The background man-of-war flies the Admiralty flag, although the Duke of York was said always to have flown the Standard at the main; perhaps this reflected his ambiguous position. [2] M. S. Robinson supposed that the naval scene may be by Van de Velde, ‘though a little flimsy and might be a copy’. [3]
Copies or versions (all showing the crown) are at Glamis Castle and Manchester City Art Gallery (1961.251). [4] Half-length versions at Holyrood, and formerly in the Dillon collection. [5] A version at Welbeck lacks the anchor and distant ships. [6]
Of many smaller derivations, there is an unattributed bust-length miniature in the Dutch Royal Collection [7] and a drawing for (or from) the head was sold in 1999. [8]

1 Transcripts of the Hamilton inventories from the Scottish NPG in the NPG library. Kneller’s full-length portrait of the 4th Duke of Hamilton, a staunch Jacobite, is on loan to the Scottish NPG (PG L12; exhibited Sir Godfrey Kneller, NPG, 1971, no.98).