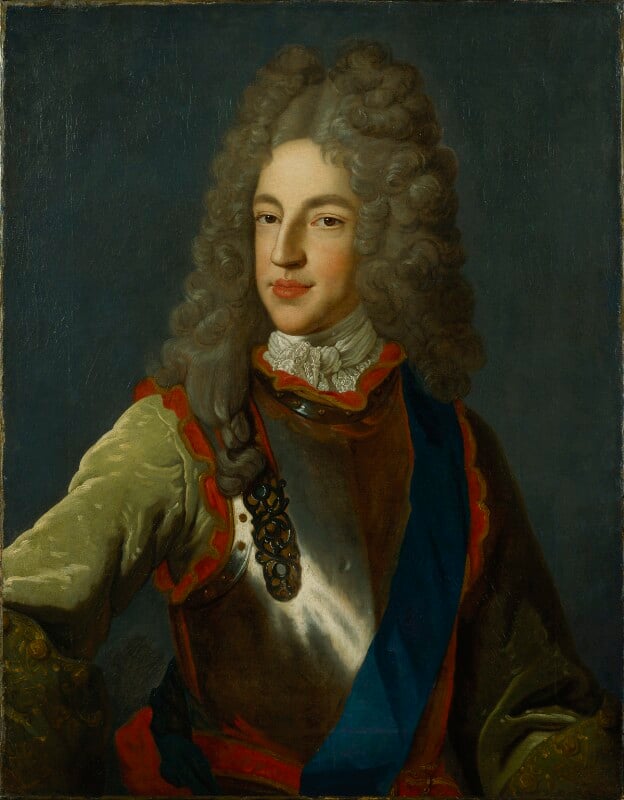 One of several portraits of this type, engraved half length by F. Chéreau and lettered 1712. A variant with head very similar but the body turned to the left, at Christie's, 25 February 1966, lot 22, from the Northwick Park collection, is inscribed on the back as painted at Bar-le-Duc in 1714. The handling of NPG 348 suggests it is not from life. It is, however, extremely competent in style, and markedly French. On comparison with Chéreau's engraving it seems likely to have been produced under Belle's supervision at about the same time as his portrait of James's sister Princess Louisa (q.v. NPG 1658), also engraved by Chéreau. Other three-quarter lengths, without the Garter ribbon, are in the Musée de Versailles and in the collections of Lord Rosebery and the Comte Arnaud de Montesquiou-Fezensac, formerly at Standish Hall. A number of miniatures based on the type include NPG 273. A pair with a lady described as Princess Sobieska, but probably the Princess Louisa, was at Sotheby's, 1 May 1958, lot 36; it is closer to the portrait of Princess Louisa by Belle. A similar but probably separate type shows James turned to the left, with drapery in place of the right arm. Inscribed as painted by Belle, January 1717, the portrait was lent by Lord Elphinstone to the 'Royal Stuart' exhibition, Edinburgh, 1949 (81).

Discoloured varnish; old damages, retouched, in the corner of his right eye, in the nose and wig, upper right; pin holes in the corners.

Bought, 1872 from William Dashwood of Newport, Isle of Wight; previously in the collection of Lady Isabella Blackford, Osborne House, Isle of Wight.