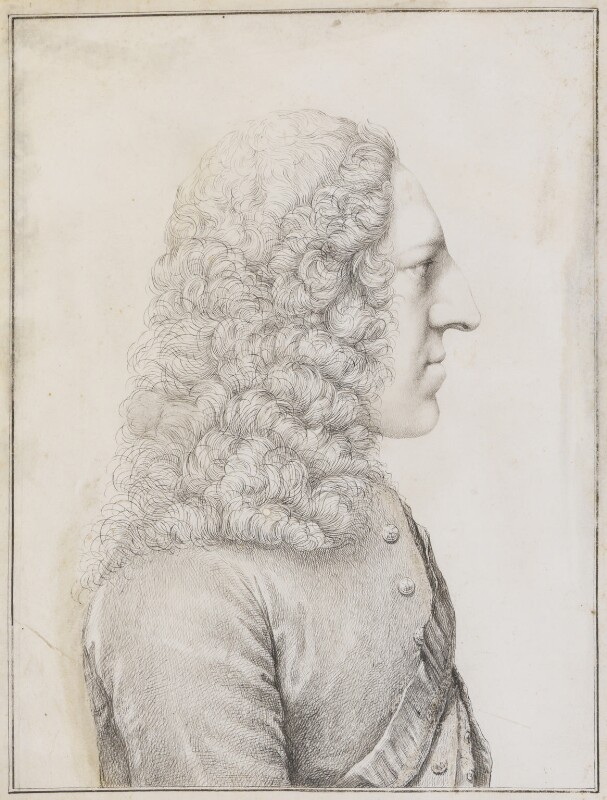 On the back of the frame a stencil: 145 PS and another ending in W concealed by the title-page of the Hamilton sale catalogue on which is a written label with Gray's account of the sitter (see Biography).

NPG 4535 is a variant version of an unpublished drawing of 1741 by the virtually unknown Milanese artist Francesco Ponzone. Now at Windsor, the portrait is inscribed [-]e o Francesco Ponzone Milanese Fece in Roma 1741 Genaro. It may well be ‘the drawing of ye King done with ye pen, extremely well done and a very good likeness' mentioned in letters dated 15 June and 4 July 1741. [1] An engraving, in reverse (F. O'Donoghue and Sir Henry M. Hake, Catalogue of Engraved British Portraits ... in the British Museum, 1908-25, 36), showing the Garter and lettered Quærit Patria Cæsarem, was published 1747 without artist's or engraver's name. On the impression in the British Museum is written in ink: 'After a drawing from life in the possession of Dr. Irwin at Rome. See Bolingbroke's letter to Sir W. Windham'. [2] Mrs Mockler owns a very similar drawing showing less of the shoulders and lettered Cognoscit me Meus. A rather similar drawing of the Young Pretender, in red chalk, in the British Museum, is by Giles Hussey. This would seem to raise certain doubts as to the authorship of NPG 4535 but Ponzone is the more probable. The Windsor drawing is the only work known for comparison. The type is worth comparing with the profile oil by Blanchet from the Hay collection (see All Known Portraits).

An abrasion and discolouration about 3 inches long behind the shoulder; a small hole, bottom centre of wig.