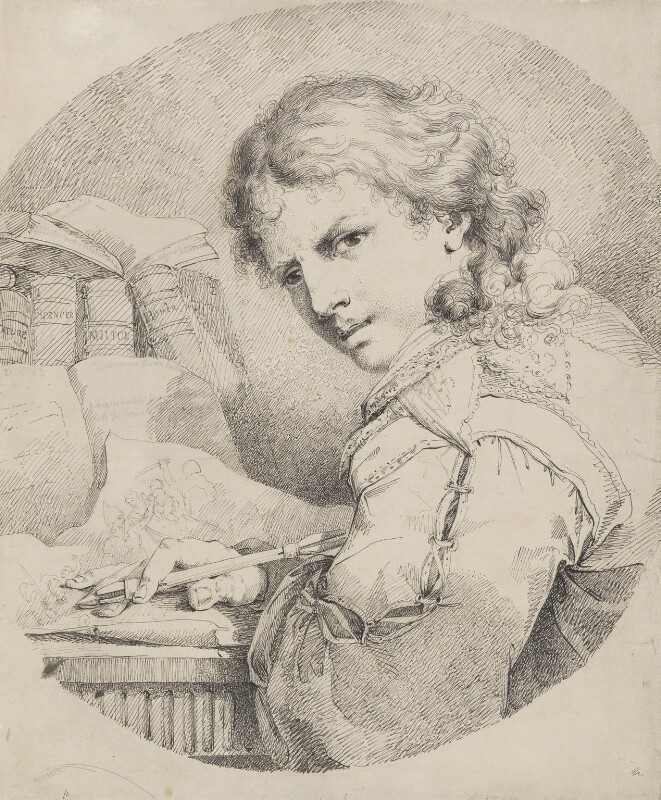 'Hond Sir - July 26 - I flatter myself I have abilities for the Art of Painting wch I hope will appear by the Drawing I send you, but indeed there are so many young Persons pursuing the same Art, that I think it will be a prudent Step to drop it intirely, & get into any kind of Business you shall think, proper, I make no doubt but you will comply with my desire more especially when you inform yourself how much the Proffession is disgrac’d by the Folly and Vice of many of the Proffessors.'
This letter, addressed to Brenchley, the artist’s patron in Maidstone, [2] together with the books carefully displayed in NPG 4669, defines a proud, young history painter, who could add the word ‘Youthful’ to a Shakespearean quotation to increase its pertinence. In each portrait the artist is shown with a historical drawing (The Massacre of the Innocents and Pride led by the Passions, from Spenser’s Faery Queen). Such evidence implies that both portraits date from the ambitious, earlier part of Jefferys’ short career, just prior to his departure for Italy in July 1775.
Both portrait drawings had been sold in 1969 as by J. H. Mortimer, whose manner they closely imitate. Even the Shakespearean quotation had been (accurately) used by Mortimer beneath his etching, Poet, published in May 1775 (an image comparable with NPG 4669), [3] and the possible derivation of NPG 4669 from a self-portrait by Salvator Rosa is wholly within the Mortimer tradition. [4] But the discovery of the work of James Jefferys in 1976 [5] led to a convincing reattribution, as was carefully described by John Sunderland in 1977 and Nancy Pressly in 1979. [6]

Wearing a fanciful seventeenth-century costume and drawing a Biblical subject, the Massacre of the Innocents; the standing books are titled (from the left): NATURE SPENCER[sic] MILTON HOMER; above them an open book inscribed on the fore-edge: ADDISON on the Pleasures of the Imagination, and on a leaf: Paper iv & v/on Greatness; leaning against these volumes another inscribed [SHA]KESPEARE Midsummer Night’s Dream and, below, And as the Youthful Imagination bodies/forth the forms of things [unknown];1a separate, later, inscription, in the bottom right margin: Pen & Ink drawing by Mortimer.