2 of 14 portraits of George Jeffreys, 1st Baron Jeffreys of Wem 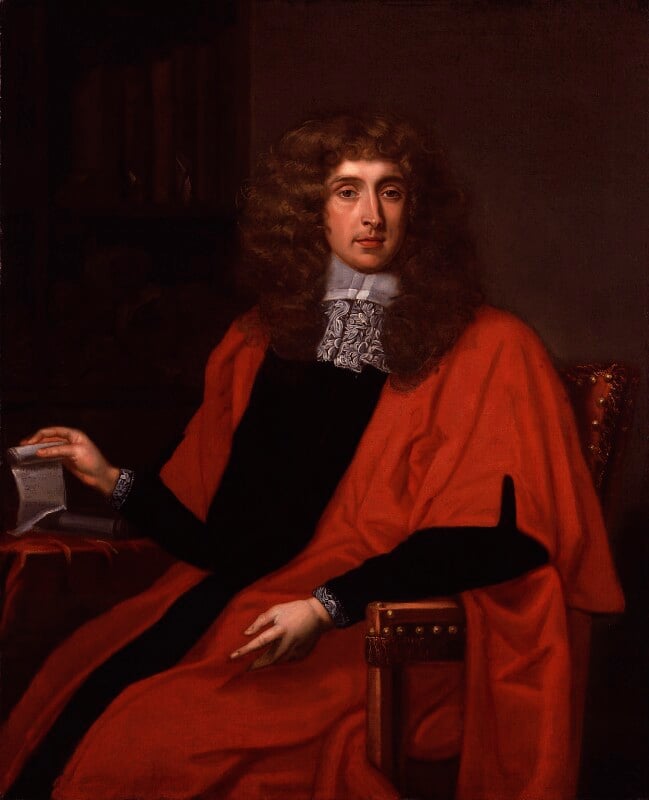 The scroll is lettered SENATUS/POPULUS/QUE/LONDONIE/NSIS

E. K. Waterhouse, The Dictionary of 16th & 17th Century British Painters, 1988, p 46 as attributed to Claret.
This portrait depends upon the earlier Wright pattern, repeating the pose, chair and the background shelving with its ledgers and scrolls, but showing Jeffreys in a full wig and the red robe of the recorder of London, an office he assumed in 1678, three years after NPG 6047 was painted. NPG 56 was received in 1858 as by Closterman; called Kneller by 1884, listed as unknown by 1920 and attributed to Claret in 1963 (an attribution first suggested in 1912 by Collins Baker who was unaware of the dependence on Wright). [1]
In 1876 Scharf saw a version ‘at Waters who purchased it of Dalgleish in Holborn’; [2] another was sold by the trustees of Nicholas Meynell, Christie’s, 11 November 1994, lot 4. A copy was with Lord Jeffreys. [3]

1) ‘The full-face pose, the type, the cumbrously painted lace, the drawing of the eyes and the peculiar structure of the wrists certainly, in my opinion, point to William Claret’ - yet several of these characteristics arise through pedantic imitation of Wright.
2) Scharf note on file (7 June 1876).
3) G. W. Keeton, Jefferys, 1965, pl.2a; he lists, p 513, another version ‘now in the United States’ and illustrates, pl.2b, a modern copy with the Judge Jeffreys Restaurant/Lodgings, Dorchester.

1 Letter from Francis Graves (brother of Henry Graves) to Scharf, 17 November 1858 (NPG archive); Graves appeared to have acquired the portrait from W. Jeffreys.