1 of 11 portraits of Edward Jenner 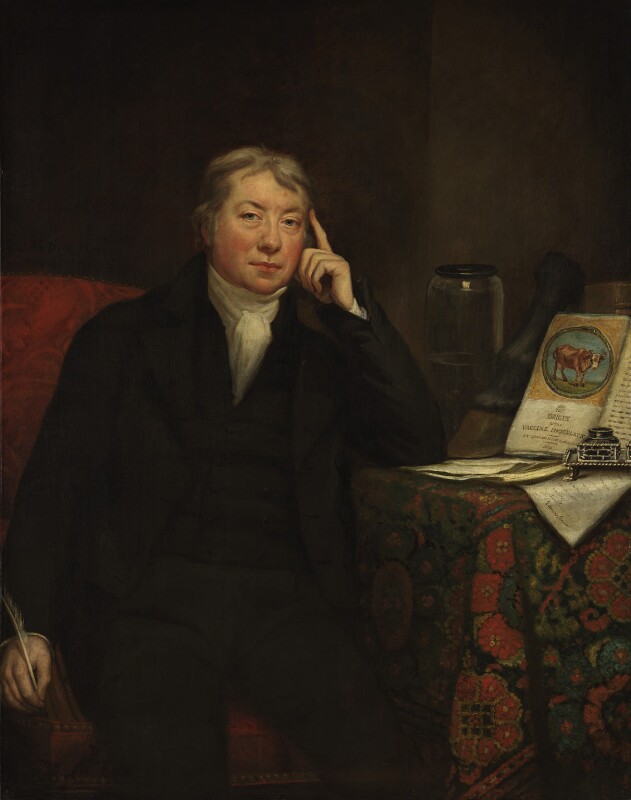 Signed and dated left above back of chair: J Northcote pinxt/1803.

Northcote painted two portraits of Dr Jenner in two consecutive years; the first, in his Register of Paintings under 1802 'Portrait of Dr Jenner - kitcat size 25 Guineas paid for by Dr Remmett Jany 1803/Dr Remmett owes me £5.5.0 for the frame', is in the Plymouth Medical Society collection, probably that exhibited RA 1803 (209), with a studio copy in Devonport Hospital; W. Say's mezzotint was published in 1804. The second portrait (NPG 62) appears in the Register under 1803 'Portrait of Dr Edward Jenner half length/bought by James Carrick Moore Esq. 40 Guineas'. This portrait evidently remained in the studio unfinished for twenty years until, in 1823, Northcote wrote to Moore 'On hearing of the death of our friend Dr Jenner I took his portrait in hand and have made a complete finish of it; as the face and hands had been entirely done from himself I have now done the background with the proper accompanyments and altogether makes a very smart picture. I intend to send it this season to the Royal Academy Exhibition where I think it will attract some notice; on a table in the picture I have introduced the bones and joints of a Cows hoof and in a glass case the Cows hoof injected, all which is to show what were his peculiar Studies' (letter 18 March 1823 in NPG archive). It was exhibited at the RA that year and in 1859 Moore wrote to Sir Charles Eastlake (one of the NPG Trustees) offering to present it to the 'National Portrait Gallery now forming. It was painted by Northcote from whom I purchased it shortly after Dr Jenner's death. I esteem the Picture as an excellent likeness of my deceased friend and as a memorial of one of the great benefactors of mankind' (letter 5 February 1859 in NPG archive).
Of Northcote's two portraits, Jenner preferred the Plymouth one, recommending Say's mezzotint to J. C. Moore with the implication of disapproval of Moore's own version (John Baron, Life of Edward Jenner, 1838, II, p 365). Moore (1762-1860), the donor of the portrait, was a surgeon, brother of General Sir John Moore whose biography he wrote, and successor to Jenner as Director of the National Vaccine Establishment.

The artist and bought from him by Jenner's friend, James Carrick Moore, who gave it to the NPG in 1859.

Small stipple (head and shoulders only without background) by Ridley, 20 August 1804 and re-issued for The European Magazine, 1 October 1804.