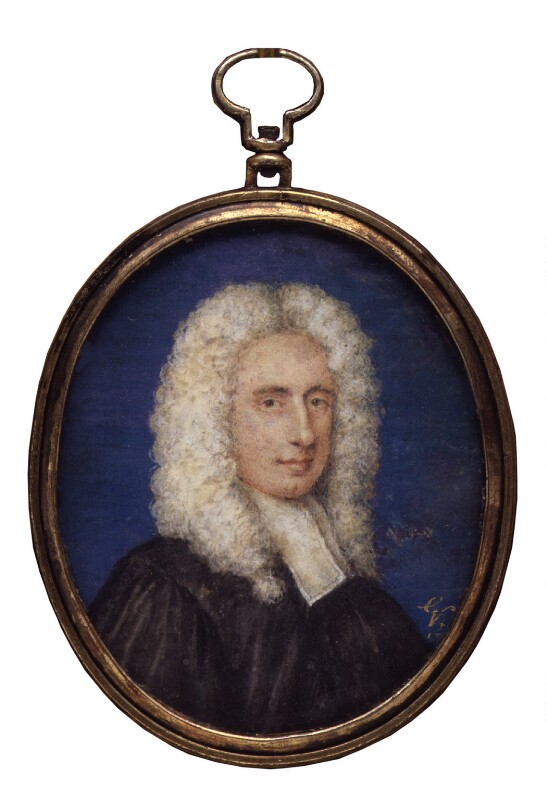 The back of the case is engraved with the arms of Johnson of Ayscoughfee Hall, Spalding, Lincs. They may be blazoned: Or a Water - bouget Sable on a Chief of the last three Annulets of the field. Crest: Out of a Ducal Coronet Or two Wings erect Sable. Johnson impales the arms of Ambler of Kirton, Lincs, namely: Sable a Cross Ermine in the dexter quarter a Leopards Face Argent. [1] Below, a motto: AEQUAM SERVATO MENTEM [2], and around the outer rim: MAUR. JOHNSON I.C. SOC. INT. TEMPLI S Pignus Amicitae accepit Amoris dedit 1731.
NPG 4684, the only extant likeness, is authenticated by the inscription and by probable descent from the sitter.

1) I am grateful to Mr Brooke-Little for his description of the arms and the following comments: Johnson has three quarterings but these are not readily identifiable and do not seem to fit the printed pedigree of the family. Ambler also has three, the third and fourth probably for Eure and Thorpe. If the objects on the bend in the second quartering are crosses formy fitched then this quartering could be for Oldfield as Elizabeth Ambler's mother was Mary, daughter of Sir Anthony Oldfield Bart; this means that the third and fourth quarterings could have been brought in by Oldfield.
2) Cp Horace lib. ii, ode 3 'aequam ... servare mentem'. According to Mr Brooke-Little, the motto must have been personal to Maurice Johnson, as the family seem to have used the motto Onus Sub Honore, fairly consistently.

Fair: severe water damage in the past has led to numerous retouchings in the face, wig and right background, but in no case do these amount to repainting. They incorporate zinc white (in use from c.1810). [1]

Given 1969 by C. A. Marsden. Weaver very reasonably interprets the inscription as meaning that Vertue gave the miniature to the sitter in token of their friendship and that Johnson gave it to his wife as a pledge of love; [1] Johnson's wife predeceased him and the miniature presumably descended through Anne Elizabeth Johnson, a great-granddaughter, who married, 1807, Rev. William Moore DD of Spalding; [2] Moore's daughter Caroline married Rev. John Howard Marsden in 1840, father of Lt-Col. Marsden of Farnham, Surrey (1841-1925), [3] the owner when Weaver wrote in 1916. [4]

By F. Holl, as frontispiece to an article on Johnson in the Proceedings of the Archaeological Institute, 1848, opposite p 82, the engraving presented by Mrs Dinham, a descendant of the sitter.