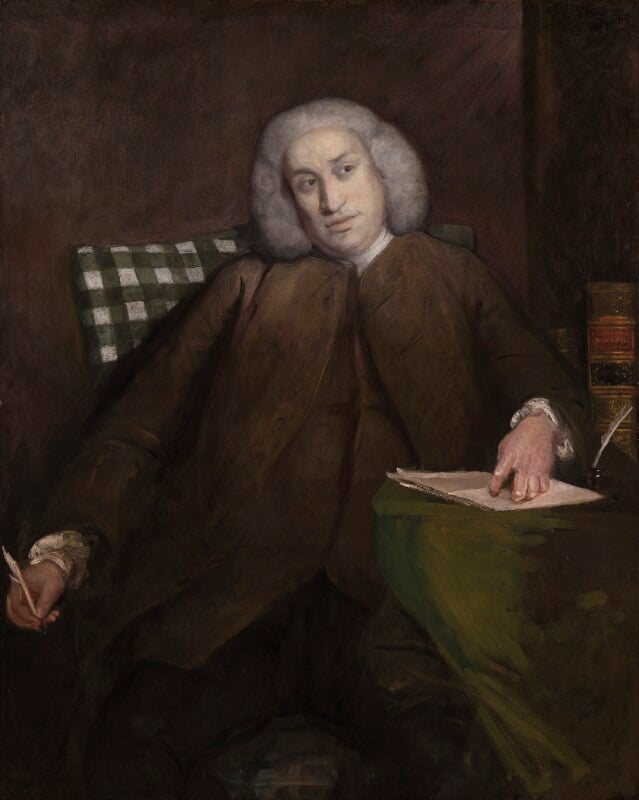 Painted in 1756-57 and later modified, as discussed below. Johnson had published his Dictionary of the English Language in 1755 and he met Reynolds soon after; [1] the ensuing friendship was of great significance for them both. The date of 1756 given on James Heath's engraving of NPG 1597 may indicate when the picture was begun; there is no Reynolds sitter book for 1756, but appointments in 1757 for ‘Mr Johnson’ on 25 January, 1, 3 and 10 February, and 30 April are associated by Mannings with the portrait. In 1789 Reynolds gave it to Boswell who wished to have it engraved for his Life of Johnson (published on 16 May 1791). Boswell was less concerned with the quality of the portrait than with its novelty, believing that a portrait of Johnson by Reynolds 'from which no engraving has yet been taken' would lend his biography distinction. [2] He originally described it as 'unfinished, though I cannot help thinking it a striking likeness'. [3] In the published text of the Life of Johnson, Boswell mischievously modified this account to read:

'[on first meeting Johnson in 1763] I found that I had a very perfect idea of Johnson’s figure, from the portrait of him painted by Sir Joshua Reynolds soon after he had published his Dictionary, in the attitude of sitting in his easy chair in deep meditation, which was the first picture his friend did for him, which Sir Joshua very kindly presented to me, and from which an engraving has been made for this work.' [4]
But Boswell first met Reynolds in 1769 [5] and would not have known the portrait in 1763.
Soon after March 1789 NPG 1597 was sent to the engraver James Heath whose plate evolved through four states, differing in detail from NPG 1597 as it is now seen. [6]
a) a ‘finished’ portrait with a bushier wig, buttons added to the waistcoat, and the left lapel of the coat turned back; a plain wooden table replaces that covered with a green cloth; on it an inkwell with a second quill and three books, one lettered on the spine Johnson’s English Dictionary A-K.
b) heavier eyebrows, the chair now also visible behind Johnson's left shoulder and a door knob behind his left arm. An annotation by Boswell on an example of the second state (which he thought the first) in the Hyde Collection indicates that further, more subtle alterations were then made: Mr Heath the Engraver thought it was finished. He went with me to Sir Joshua Reynolds who suggested that the countenance was too young and not thoughtful enough. Mr Heath therefore altered it so much to its advantage that Sir Joshua was quite satisfied ... [7]
c) incorporating Reynolds's suggestions, the abstracted gaze marginally shifted towards the spectator, shadows round the eyes and a frown on the forehead; a chair arm below the right wrist. Reynolds understood that the meditative Johnson of 1756 did not compare with the burly pedagogue [8] suggested, for example, by the many copies and engravings of the Reynolds portrait of 1772. An example of this third state (Hyde Collection) was annotated by Boswell: Second [sic] Impression of Dr Johnson’s Portrait after the Plate had been improved by Sir Joshua Reynolds’s suggestions. Mr Heath afterwards gave it a few additional touches. [9]
d) as finally published in 1791, virtually the same as c), with slight additional touches on the coat and breeches.

The evolution of Heath’s engraving is thus well documented, but not that of NPG 1597. Recent technical analysis has confirmed that changes were made so that the painted portrait agreed with Heath’s final engraving, but how many of these changes were made for the engraving, or how many from it, and which, if any, had been made sometime before, is no longer clear. Those changes described above in Heath’s first proof must have been made to the painting by 1789, presumably by, or under the supervision of, Reynolds (whose eyesight began to suffer in 1789) -but whether all were done at that time, or whether some had been done long before (as the table and the dictionary), is not clear. The changes described in the second and third proofs of Heath’s plate must have been transferred to the painting in or after 1791. It was not then a particularly pretty sight.
Adverse comment mainly concerned the condition. In 1825 it was 'completely faded'; [10] in 1854 Waagen, exceptionally, found the execution 'broad and masterly', but described Johnson as being 'at an advanced period of life and evidently suffering from illness'; [11] in 1867 the complexion was 'quite pale' and the whole was 'not worthy of Reynolds', [12] and in 1884 the portrait was described as having been 'painted on'. [13] When the picture was cleaned in 1976 the post-1757 alterations were removed, but the books and the ink-well were painted over with a water-based pigment. [14]
A half-length, apparently nineteenth-century, pastel copy is in the Johnson Birthplace Museum, Lichfield. A related half-length miniature in the Hyde Collection, showing Johnson in a mauve suit, was engraved by E. Finden in 1830 as ‘from a miniature worn as a bracelet by Mrs Johnson’ - who, however, died in 1752. [15]

Blue-grey eyes, powdered wig, wearing a brown coat and waistcoat with dark-grey breeches; the chair covered with green and white check, the table with a green cloth. Johnson habitually wore ‘clothes of the darkest and dirtiest colours, and, in all weathers, black stockings’.1

Given by Reynolds to Boswell, probably in 1789; the Public Advertiser, 18 June 1791, announced that ‘Sir Joshua Reynolds, with a munificence truly princely, has ... presented Mr. Boswell with the large portrait of Dr Johnson’; Boswell sale, Sotheby’s, 3 June 1825, lot 3293 as 'painted for the late James Boswell of Auchinleck', bought John Graves of Southwark and sold by him to James M. Morrison;1 thence by descent to Charles Morrison (d. 1909); presented anonymously 1911.